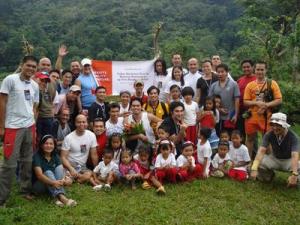 Get a bunch of the country’s first all-gay mountaineering group, put them in the middle of the crater of an extinct volcano famous for its  reputation as a spooky mountain, add some gin, a dose of drama, and you get a rocking and rolling climb.

But first, a little charity. As part of the 23rd climb and 3rd anniversary of Guys4Mountains, we donate some school supplies to the daycare center of Bangkong Kahoy at Dolores, Quezon. The sky is overcast and Cristobal looms over us, covered with fog while we distribute the simple gifts to the appreciative kids.  It really isn’t much but for children whose education has become more of a privilege rather than a right, it means a million to them.   We are rewarded with a huge serving plate of  fried camote and cups of instant coffee.  A few “we-were-here” camera ops later and we are on the road to the jump-off point for the 4-hour trek up Mount Cristobal.  I am so excited.

Devil Mountain. The sky is overcast but thankfully it doesn’t rain. It is around 12 noon and we have just finished our packed lunch at Montelibano’s house, the base camp at the foot of Mt. Cristobal.  There is no one there except for another group readying for the climb up.  It’s  about 30 minutes up a cemented path then on to the forested slopes of this mountains. .  Kelly, Frankie, and BlueFairy Guy are sprawled on the grassy yard and have opted to stay behind having climbed the mountain previously. The dark sky and thoughts of muddy trails beckon me to stay behind and probably do a day climb. But Rowell snaps me out of this thought.   Iif you’re gonna do a day climb, might as well not climb at all.” Halfway-up the mountain, I thank god for not doing a day climb. It would have been too taxiing.

Cristobal has the reputation of being the evil “twin” of mystical Banahaw where the unholy and the unreal lurks in its foliage and shadows. People who have climbed the mountain swear of seeing the unseen and of hearing unheard-of voices. Trekking the muddy overgrown trails of this beautiful mountain, it is understandable how a fertile imagination fed with other trekker’s tails can easily be spooked. We walk, rather, climb under a canopy of leaves, branches, and vines. The narrow path is littered with twigs and leaves while precarious drops line one side. At certain points, nearing the crater, we step around a large boulder . With one foot standing nimbly on a small rock we grab hold of vines and roots and so000 carefully go around the boulder a movement that mountaineers have lovingly dubbed as “romancing the stone.”

A couple of meters later, we reach a sheer wall of roots and vines. One suddenly wishes more time time spent doing flexibility exercises at the gym and not just pumping iron. We grab hold of anything, anything that stays rooted to the water-logged soil (thank god for roots) and cling to the mountain face as we look for a foothold. One tries not to notice that below is a ravine filled with thorns. Fortunately, one guy of the  small group ahead of us on the traito call out where to grab, cling, and step. We make it over to the other side. I swear, my heart was in my throat.  The challenge is not over yet, however.

Legend has it that a creature named Tumaon roams the crater of this extinct volcano. We are at the rim and ready to descend into Tumaon’s lair. Large boulders line the descent. There are no clear footpaths, only moss-covered rocks and some roots to grab on to. Carefully we find footholds where we can and engage our core muscle to keep ourselves from sliding all the way down.  Finally we are at  the crater. The place looks more like bog or marshland rather than campsite.  Others had already set-up tent on the soggy soil that sucks you like quicksand.   I  choose a spot at the center of the crater near the swamp. It looks nice as it is covered with grass.  It’s actually a test drive for my brand new Marmon Tent I got at REI in the US a month ago.  The next day back at at base camp, BlueFairy Guy tells us that on their previous climb they were told by the guide not to camp at the center as rain can suddenly “collapse” the soil.

It’s only 4 pm and my legs are really really really spent. I lean forward and my abs cramp. The campsite is muddy especially with the nearby swamp. It does look eerie, something that would look just right at home at the Blair Witch Project set. At one end of the crater, a small path leading to the side of a swamp is a sign that reads “Lugar ng limang elemento..igalang.” That sign however did not dissuade me from dumping my sh^&t  as it was the only secluded area in the campsite.  I did ask for permission from the elements there before pulling down my shorts.

Tequila Night and Soap Operas. Darkness falls and I’m stuffed full with my dinner of  spaghetti in a hotdog and tuna sauce. Tip: If the campsite has no water source, cook your spaghetti noodles in advanced. Buy some tomato sauce and a can of tuna with oil. Just mix them all up in your cook set and voila! you’ve got hot yummy spaghetti without spending a drop of your precious water rations.  The oil in the tuna will “revive” the spaghetti noodles.

With nothing but the croak of frogs and the buzz of insects, night time is beautiful. We are under a canopy of stars. It is only 9pm but it seems like we’ve been camped-out forever. Socials begin and I win a Habagat bottle holder. Tequila and gin goes around and everyone gets drunk. With Adam around, Malate can’t be that far behind ven if you’re more than a thousand meters above sea level. The guy did not disappoint.  Out of his pack come  iPod speakers and strobe lights!   In an instant, the crater has suddenly become the BED dance floor. It’s  also his birthday so we have cupcakes 🙂

I am really tired and after a few rounds of stale peanuts, I call it a night. I wake-up in the middle of the night to a few shouts. The party has just broken and as always, there are a few dramatic moments between a few drama queens. What would a Guys4Mountains socials be without some excerpts from your favorite soap operas? Helga shouts, “Rock and Roll!” Rowell exhorts everyone to go back to their tents and call it a night. Hilda looks for chismis but Wapak pushes her to her tent. I go back to sleep. Then all is quiet.  I am all alone in my tent as Ogie has shacked up with Titan and Nena is with Eric.

Brrrr. Early morning and Ojie is back in my tent and it is very very very cold. I take a dump somewhere then it begins to rain. I start thinking that the elements are punishing us for taking a dump at their lair.  But I did ask for permission. It  pours and pours. The sky is an ominous grey and it looks like the rain wouldn’t let up. Breakfast is a couple of custard cakes and some water. About 9 am, the rain stops and we manage to break camp. At 10 am, I’m with the first group that climbs out of the crater and on to the trail back to base camp. The trail is really muddy now and we, particularly me, make slow progress. This is one trail you wouldn’t want to slip and fall off from. I am especially anxious about the that big boulder we have to go around and the wall.  About 2 hours later, we reach base camp. I am soaked and my boots are covered with mud.  An hour’s rest to wait for the others and regroup then we all head to the jump-off and on the jeeps to Kinabuhayan for wash-up and lunch.  I am really really starving as I didn’t bring much food with me (miracle!).

River and Lunch. At Kinabuhayan, past the rows of stores selling herbal remedies from pampalinis ng dugo to para sa sakit ng ulo we head to the river to bathe.  There’s a small shrine with candle offerings and flowers on one part of the river.  We bathe from the waters gushing out of a couple of large pipes. The water is cold and refreshes me.

We have lunch at one of the eateries where I buy and exhort everyone to buy bottles of ginataang santol.   It’s past 3 and I am tired and sleepy.  We take the first bus that comes along the main road.  Traffic isn’t so bad at the slex and I’m finally home.