KL in a Day

I am writing this amidst the cool air of the Cameron Highlands.  After the frenzy in which I took in Kuala Lumpur yesterday, I feel so  is refreshed. I had planned on doing some jungle trekking today but it’s past 2 and the woman manning the desk at Daniel’s Lodge advised me not to proceed as getting caught in the dark deep in the jungle is dangerous. Also, it has been raining the past days, a fact she attributes to global warming. It’s okay as I really need to slacken a bit especially since I noticed some red streaks on my eyes. I’m just waiting for the rain to stop then  I’ll be hiking the 40 minutes to Robinson’s Falls. Cameron Highlands  reminds me of Sagada back home, albeit more commercial and touristy. There’s actually a Starbucks and an HSBC branch here.  I think I’ll be able to kick back my feet and rest a bit here.  Yesterday was really tiring and I would definitely not recommend doing what I did— rushing around KL to see all the sights in a single long day.  So how did it go?

The iconic Petronas was my first stop and my first mistake.  First of all, anything that is more than 10 stories high may  loos like a 10 minute walk from where you are.  But it is not.  It’s an optical illusion.  As the tallest building in Malaysia, the Petronas looked like a 5 minute walk that turned to a little more than 40 minutes.  I didn’t know how to get to it from Bukit Bintang. I merely looked up at the sky and followed it like  the Three Kings following the Star of Bethlehem.  At one point, I panicked as I couldn’t see it when I turned a corner.  By the time I arrived, I figured the tickets to the observatory would be all sold out already.   It truly was magnificent and beautifully designed with its mirrors and glass walls shimmering  like diamonds against the blue sky.  But what caught my breath was the sight of  a monorail station right across it!  I could have taken the MRT and strolled right to the tower!  What was the point of staying at a guetshouse with the Bukit Bintang station almost right outside my doorstep!

Kampung Baru
Exiting from the station, I knew there was something different—-I was the only one there! Stepping out, I was greetedby the heat of the morning sun and utter stillness.  A short ride away and I’m transported in an otherworldly place.  The Petronas loomed from a distance but at the kampung , there were only low apartment buildings and small houses.  It was like being in a sleepy little village.   The main attraction was the Saturday pasar malam (night market) as mentioned by Lonely Planet.  Either I was just plain stupid to go mid-morning expecting a market or  I was just hoping against hope that there might be some kinda of a day market.  About a hundred meters from the station was  a small covered area with lined with Malay food stalls  and some tables and chairs.  I  bought 2 pieces of freshly-made roti at RM2 each and  2 curry puffs and 3 tako—my favorite dessert of sweet glutinous rice in pandan leaves.  Seated at one of the tables, I was constantly being asked if I were going to order so I left.  I think the roti stall had no dine-in options as I was handed the bread wrapped in paper and placed in a brown bag with some curry sauce.  I didn’t have a map of the town and the sun was really hot  so I opted to go back to the station. I took a small path to 2 wooden houses that had traditional M

alay architecture. I really didn’t see much but it was nevertheless a nice excursion to a small part of KL that had no tourists and had a more local vibe.

Forest in the City

I stumbled on the Bukit Nanas Forest Preserve on my way to another connecting station.   Inside, it’s not hard to imagine you’re really in the middle of the forest though the occasional honk of a passing car brings you back to reality.  Bukit Nanas is supposed to be a preserved piece of Malaysian rain forest.   A sign board pictured a a few short well-marked trails you can follow.  I took the short Jerantut trail. Plants and trees were labeled.  Mosquitos were a little bothersome though.  Since I was unable to eat the food I got at Kampung Baru, I decided to have a picnic  at one of the tables under some trees.   Emerging from the trail, I walked across a small shady spot with picnic tables to the entrance of the  canopy walk that led to the base of Menara Tower .  It came as a bit of a shock after the quiet at the forest reserve.  There were hordes of buses dropping off tourists.  Now eclipsed by the Petronas, the Menara still cuts a beautiful silhouette against the city skyline. With so many people lining-up to pay the RM28 fee to the observation deck, I just stayed long enough to cool-down, have a drink and listen to a gamelan performance.  I found my way back to the canopy walk and again on the forest reserve.Gamelan performance at the Menara

Aircon Stop: Mall
A mall is really the last place you can expect me, trying-to-be-intrepid traveler.  I was really supposed to got Chow

Kit but took the wrong train so I ended up back to Bukit Bintang and thus went malling instead.  At least the aircon was a respite from the heat.  I skipped the plush ones like Berjaya Times Square and opted for the more local like Sungei Wong which was crammed full of shops geared towards the youthful fashionista. One store had a lot of Japanese fashion with Japanese-fashion looking sales boys (they look more like boys than men). I was tempted to  buy some stuff as the only thing I had bough aside from all the food, was a pair of cargo pants on sale at BodyGlove. But I figured better to do all the shopping when I get to Bangkok–much cheaper.

Refreshed from the mall, it was time for a Lonely Planet walking tour. This time to take in Malaysian colonial history starting with one of Malaysia’s oldest and most respected mosque, the Masjid Mosque beautifully situated along the river.  It’s minarets and wide prayer halls looked so tranquil surrounded by greenery.  Since it was closed for prayers and I didn’t want to wait till it re-opened at 2:30, I just took photos from outside.  It was a long hot walk to Merdeka Square with its beautiful beautiful buildings such as the National History Museum, which unfortunately was closed,  the National Library and the Royal Selangor Club. Across it was the complex of the Ministry of Culture and Antiquities. With its beautiful copper-plated cupolas, domes,  arches and massive structure, I liked it the most. It was such a fitting building to a government agency in charge of the country’s heritage.  The Moorish design was a complete opposite of  the mock Tudor syle of the Royal Selangor Club just across it.  Rounding the corner I came sight of St. Mary’s Cathedral. Small and painted in simple white, it’s simplicity was in stark contrast to the grandeur of the nearby structures.  The sun was in full force but I was bent on finishing the entire tour.  Retracing my steps, I crossed to Masjid India opposite the mosque for a stroll to Little India.  The covered pedestrian walk was crammed with stalls selling sweets, food, refreshments, and everything from pirated dvds to clothes.  Pit stop was a store selling colorful Indian snacks where I bought those round orange-colored sticky sweets that I like so much. Turning right from the walkway brought me to the Masjid Temple at the center plaza.  It was fun browsing through the stalls and stores.  For RM55  I got a cool psychedelic woven fez from Uzbekistan.

Museum of Culture and Antiquities 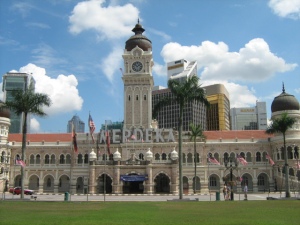 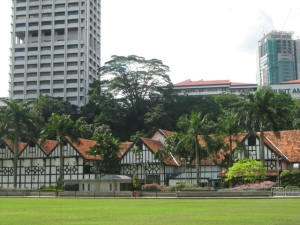 Once again backtracking, I crossed to the other side of Jalan Sultan Ismail, the main road, for the long stroll to Chinatown.  With so much Chinese exposure and interaction back home, I thought 0f ditching this area.  But since it is home to the oldest shophouses in KL, it seemed worth a look.  Since Melakka, I’ve been fascinated with shophouses.  They’re quaint and are a delight to look at.  The promise of some kopitiam at Central Mall was also a deciding factor.

With its air thick with the smoke and aroma of burning incense and a crowd of people making  offerings while  numerous status of Chinese gods and goddesses look the Guandi Temple, was one of the most atmoshpheric I’ve been to in Malaysia.  Suspended on the ceiling were columns of incense coils at the center of which were hung with paper inscribed with Chinese calligraphy asking for petitions.  Opposite it was the imposing Sri Mahamariamman Temple but the facade was under renovation and I didn’t want to go in anymore as I was in rubber shoes and taking them off would be too much trouble.  There were other temples in the area but the air was sticky and the lure of kopi tiam at nearby Central Market was too much to resist.

The Art Deco building that houses Central Market was a cool respite from the heat.   My legs were a little tired so I didn’t browse much.  The crafts were a bit overpriced though so I just settled on a  couple of Malay sweets (again!), a cup of kopi tiam and some iced kackang.

Tired and hot and all templed-out, I cut the t0ur short, backtracked and went straight to the center of Chinatown action—Jalan Petaling.  It was a claustrophobe’s nightmare—elbow to elbow stalls of fake goods, noodle stalls and hordes and hordes of the steaming masses and more steaming tourists.  Walking the entire length of the street was like going through one big obstacle course.  I decided to call it a day and trooped to the nearest monorail.

Dinner was at Jalan Alor (where else) for some prawn mee, satay, and iced kackang.