An Extraordinary Day Or How I Missed My Flight

Today was my last day at Bangkok. Or so I thought. I had planned this day well– a final walking tour (again based on Lonely Planet) at the old side of Phrakon Nakon at Banglamphu and Ko Ratannokosin. I meant to take in sights out of the usual tourist trail and head back to the BTS from the Phra Athit pier on board the Chao Phraya Express.

Disembarking from Saphan Phut, I passed the market where wholesale flowers and garlands for temple offerings were being sold. It was a bit cloudy and a cool breeze was blowing so I didn’t mind the walk which brought me to old quarters of the area including a stroll to Saranrom Royal Garden, a lovely park set out like an English garden with a small temple tucked in its corner. Exiting the park, I came to old lift bridge  (Saphan Hok) that links Ko Ratannakosin with Banglamphu.

Saphan Ho. In the ancient days, barges would cruise along the canal and the bridge would be hoisted. Today, the bridge remains silent, raising its planks no more.

The khlong was bordered with leafy sidewalks and being a Sunday, the main road alongside it was quiet. Crossing to the other side and following a khlong I passed through a little soi with children playing and a few families out enjoying the cool weather. It was easy to imagine how Bangkok looked in the olden days when streets like these were bordered with shophouses rather than malls and modern structures. I was experiencing a side of Bangkok that doesn’t see the light of day in tourist brochures. The end of the soi brought me to a main road where I detoured to a park that used to be a prison. Save for some old walls and towers, there wasn’t much to see. Following my Lonely Planet map, I pressed forward until I reached the Golden Palace. I was back on the tourist trail. It would have been nice to re-visit the palace but the steep entrance fee reminded me to press further on with my free tour.

At Wat Suthat, j ust before crossing the street to enter, a local asked me, “You’re not Thai. How do you know that’s a wat?” I showed him my guidebook opened to the walking tour map. He was probably a tout looking for a gullible tourist. No way was I gonna be that again. Last year’s lessons have been learned. A simple conversation with a tout outside the Grand Palace led to a tuk-tuk ride to a gem shop with Arthur buying an expensive ring and a visit to a temple that was way out of our itinerary. Back at the Grand Palace, a sign at the entrance shouted ” Be careful of people offering visits to the Lucky Buddha, Gem Shop, and tuk-tuk.” We’ve been had. That evening, reading my Lonely Planet guidebook, an article about the gem scam detailed our experience exactly. So I said good-bye and told him I was from the Philippines and entered the temple. 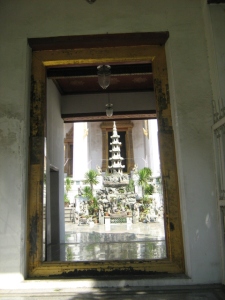 A crowd of locals were making offerings of lotus flowers, joss sticks, and garlands. Guarding the arches that led to the ceremonial hall were status of guards in English clothing with amused expressions much like you would most likely see in Disneyland than in a Thai wat. I’m sure there’s something historical about this. Outside the worship hall, I prayed for a safe flight home.

Exiting the complex from the opposite side brought me to the giant red swing just across city hall. In the ancient days, people would ride the swing and try to reach for a prize suspended way up. Believing that the higher you go the higher your reach the “gods”, people would of course try to swingup to the skies and most often end to their death splattered on the ground. The swing hasn’t been in use for centuries and it stands starkly red against the blue sky.

Monk’s Bowl. Arawy, the cheap vegetarian eatery would have been a good fuel stop but I was pressed for time and figured that finishing the tour then lunching at leafy Soi Rambutri was a better idea. Crossing the street, I passed by shops selling giant buddhas. I finally reached the turn to Golden Mount but I took a detour to the Monks Bowl 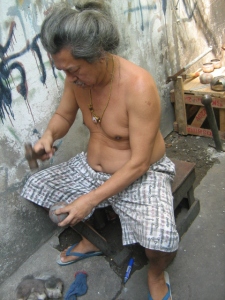 village. More of a collection of cramped streets, there was no other tourist there except me. I was led to a grey-bearded man who seemed to be in charge. Only three families still practice the craft and income is mostly from tourists buying the bowls for souvenir. Apparently, I stumbled on one family “factory”. I followed him to a short maze of streets where I saw how the bowls were made. A woman sat on a low stool hammering the pieces of metal to make a bowl. At a house, one guy was cutting metal plates. From what I gathered, bowls were made this way: pieces of metal are cut then glued and hammered together to make a bowl. Then they are heated in fire then finally painted with lacquer. 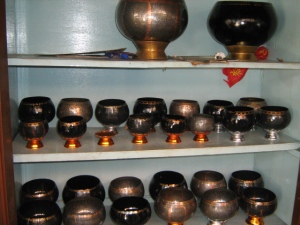 A small cabinet displayed bowls of various sizes and you can even get an unlacquered bowl should you want to see the metal plates. I got a small one for THB400 which included a photocopy of the maker’s certificate of recognition awarded by the city district as being the best monk’s bowl maker for 2003. At the corner of the street leading to Golden Mount was another bowl maker. I went for a look around and he showed me an article about his father who is reputed to be one of the best bowl makers. He took out a bowl and a wooden pestle and rubbed it on its rim producing a lovely ringing sound. I guess, that’s one way of checking the bowl’s quality. I told him I already got a bowl from the village. He said that that make produces bowls in 1 day while it takes him 2 days. 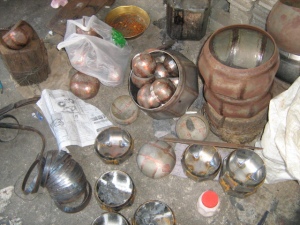 Golden Mount is a small concret hill. At its base, partly covered by shrubs and trees was a short path that led me to rows of old tombstones that time and people seem to have forgotten.

Steps wound all the way to the top of where Buddha’s relics are kept. There really wasn;t much to see on the mount itself.  The small room where the relics were entombed were crowded with so many people making offerings.  The view of the city was spectacular, though.  My camera had run-out of batteries just as I was ready to snap a photo of the shrine.  Perhaps, Buddha didn’t want any photographs.  Midway was a rest point with rows of large bells that people rang. I like the sound of bells and I believe ringing them, just like chimes, brings good luck.

The sun was out and I was quite tired so I took a cab to Soi Rambutri. A tuk-tuk offered to take me for only THB10 but I would have to go to a gem shop. After the tuk-tuk scam last year that involved 2 gem shops and a side trip to the Lucky Buddha, no way was I gonna fall for that again. All the tables were full at Soi Rambutri so I decided to just head back to the hotel and find lunch somewhere there.

In the middle of the grand Mae Nam Chao Phraya on board the ferry to take me back to the BTS, a frightening thought suddenly hit me. The Sunday 12:05 am flight was MORNING and not EVENING. I have always been confused with 12:00. I refer to it as either 12 noon or 12 midnight. So a 12am or a 12pm is something that confuses me and as far as my ticket and travel itinerary goes, 12:05 am meant 12 midnight to me. Back at the hotel, I made calls to Cebu Pacific which confirmed my thoughts—I had indeed missed my flight. Fortunately, I was on leave till tomorrow. So what to do when disaster strikes? Turn it into an opportunity. Since I was bound to pay the penalties and the fare difference anyway whatever day I choose to fly home, that opportunity meant an EXTRA day in this city I love so much. Not that there is anything left here that I haven’t really liked to explore. But maybe it’s the chance to cruise the Chao Phraya in the evening. I gave my credit card details to the operator and half-an hour later when I checked my email, I got my e-ticket for my Tuesday morning flight. I booked another night at the hotel and was on my way to MBK.
Lesson learned: Know your flight schedule. A Sunday 12:05 am flight means it departs on Sunday early morning and not Sunday midnight.