All Temple-d Out and Nowhere To Go

We leave for Bangkok tomorrow on an overland trip through the border at Poipet (C) and Aranya Prathet (T).  After 3 days at Siem Reap and exploring the temples at the archaeological park, have finally been afflicted with temple fatigue of the physical rather than the  cultural type.  Over reading or researching a particular destination can sometimes result in being underwhelmed when you finally get there and see it.  Not so with Angkor. Even after all the superlatives and breath-taking photos, the sights still came 0ut  unexpected  eye-boggling.  Thailand’s Ayuthayya already had me in awe even after my second visit.  Angkor just blew me away.  I only wish I read more about its history and aesthetics to better appreciate it more especially since Buddhist and Hindu elements were sometimes juxtaposed.  The cheap books on Angkor being sold at the night markets and even at the temples are a must buy.  I got a copy of  “The Temples of Angkor” and unlike the guide books and best sellers being sold, the Angkor books seemed real and not pirated.

After sunset at Phnom Bakhaeng, the next “must do” was sunrise at  where else, but the grand dame of Angkorian temples at the park, Angkor Wat.  Our remorque ( I prefer to call it that rather than tuk-tuk) driver picked-us up from Eight Rooms at around 5 in the morning.  It was still dark and a little cold.  Since we bought our ticket and entered the park at 5pm the previous day, January 2 was our Day 1.  A crowd of vendors peddled us “something to eat” or “something hot to drink” which we all insistently and nicely declined.  Tip: make sure to bring a flashlight as it was dark.  People were arriving in droves and we slowly made our way to the temples using our cellphone as light.  It seemed the viewing spot of choice or rather requirement were the two large pools.  I guess the sun’s rays were supposed to reflect on the water.  So we chose a spot near a Caucasian girl who was busy painting the temple facade as light slowly came.  She was like Renoir painting the Rouen Cathedral.  Francis made small talk with her while I scanned the sky for what was supposed to be a spectacular sight.  But daylight came and there didn’t seem to be any sun rise.  It just became light. Unlike  Phnom Bakhaeng, nobody clapped. So I guess there wasn’t anything.  Or maybe our expectations were too high.  I made our way into the temple with me following the frieze that depicted that Ramayana.  Francis chose to attack the temples while I followed the galleries trying to understand the story.  Eavesdropping on English-language tour groups were helpful.  The gallery where the famous “Churning of the Ocean of Milke” was closed so I had to make my way outside, yelped as I slipped down the wooden stairs, stood-up as if nothing had happened, and ogled at the life-size photo of the frieze. I made my way up again to enter the next gallery.  Unable to fully appreciate the friezes, I made my way inside the courtyard and into the temples.

It has got to be the crumbling edifices of  Bayon and Ta Phrom.  The ravages of the jungle would bring out anyone’s inner Indiana Jones or Lara Croft.  But nothing really beats Banteay Mealea.  An atmosphere of abandonment quickly envelopes you as step into the ruins where massive boulders that once stood proudly erect are left to the elements.  There weren’t too many people and the trees kept the site leafy and cool.  There were wooden walkways built for the filming of Jean Luc Godard’s film way back in the 1990’s but more exciting was clambering over the boulders to get to shadowy galleries and chapels.  A female guide from the Apsara Authority guided me where to pass and climb and  the pointed to some architectural details  such as the surviving stone carvings which I would have otherwise missed.   It was a thrill to be walking on top of arches with only about a foot and a half of walking space. 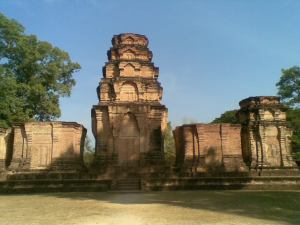 It was like bouldering on a mountain side but this time I was climbing up and down fallen posts, roofs, and buildings.  Getting down from a ledge, my guide exclaimed in surprise at a pile of mossy rocks.  Her eyes wide, she  pointed out a baby snake hiding.  Now, if there’s a baby snake, there must be a mommy snake.  So while she took pictures of it with my camera, I hurriedly stepped down.  I was in sandals so I didn’t actually relish coming across a snake or a  scorpion especially since  I saw a dead one on the bridge way. I tipped my guide $2 which seemed too much as Francis only gave his $1.  The 60k ride on the remorque with all the dust and heat was definitely worth it.  The sealed road took us along wide open plains in the countryside and sometimes into small villages  where people still wore sarongs, harvested palm fruit to cook into sugar, and the more traditional Khmer life was more apparent.  On the way back, we stopped by a row stalls where we bought some hardened palm sugar wrapped in palm fronds.

For some people, Angkor Wat is the end-all be-all of all the temples.  To stay only a day for Angkor and forgo the rest would be such a shame.  I like to think that a visit to the archeological park is a spiritual experience where you can find a temple you can call your own. Even the smaller ones such as Bakong and Lolei of the Roulous Group have their own charm and more importantly, their own story to tell.  It may not even be a temple but a reflective pool of water such a those on the Phimneakas at Angkor Thom or at Srah Srang.  These pools made for really nice stops to just chill-out a bit before heading to the next set of stones and boulders.

I just wish someone doesn't get it into his head to start putting boat tours at Srah Srang. 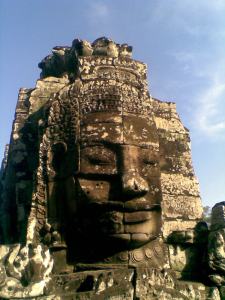 Each temple had its own character and atmosphere.  The Roulous Group were definitely tiny compared to the rest, but they weren’t less interesting.  I especially enjoyed Prae Khan where different animals such as the elephants representing the elements were placed on strategic corners of the walls.

The River of a Thousand Lingas

With such an evocative name, Kbal Spean definitely did not disappoint. The short trekk through bamboo groves and shrubs made for a nice hike, albeit a little hot.  We ended up on the top of a water fall where the river with its bubbling water had beautiful lingas and Shiva images on the riverbed carved by hermits hundreds of years ago.    There were also images of animals such as those of a frog and a cow.  Looking at all the carvings, I couldn’t help but admire the faith that the ascetics had in keeping up with their faith amidst the harshness of the jungle.  It was thrilling to look at rocks and boulders and spot beautifully carved figures on them.  A pathway led down to some stairs to the bottom of the waterfall.

3 days is just right for the temples.  A more relaxing pace would be to stretch it out to 4-5 days to take in more at a less taxing pace.  But of course that also means getting another 3 day pass.  A pass that allows 3 days within a one-week period rather than 3 consecutive days is best as it leaves more flexibility in planning the trips.  Most of the complexes are really huge and requires a lot of walking and steep stair-climbing.  And a lot of the popular temples have big crowds which means finding a spot for the perfect Kodak moment is an impossibility.  At  Pra Bakhaeng, for example, we waited for the sun to set together with a thousand other people.  The sunrise at Angkor Wat the following day had less people though.

There really aren’t many people here now.  The bars were kinda quiet last night.  We had a drink at Angkor What? and at Linga bar which I was hoping would have enough people to chill-out with.  But only the hustlers were there.  We also bade farewell to the people at the food stall we have dinner at every night.  The woman and her sisters, whom I assume were the owners, had been very nice and accommodating and would even give us free fruit for dessert because we were her “good customers.” The food is quite cheap ($1-2) and good.  It was better than the $3 meals we were having at the food stalls at the archeological park. 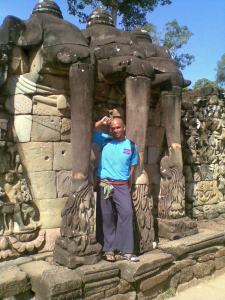 Terrace of the Elephants

But Siem Reap is not all temples.  This morning, we went to the silk farm run by Les Chantiers Ecoles located about 30 mins from the center.  A guide led us to the different rooms to see how silk was made into cloth. I have always  thought the worms would just spin some threads like spiders  people would harvest it.  But no!  It’s something more horrible.  The worms weave the silk threads into a cocoon around them which are then gathered and boiled!  That’s right!  The worms die a horrible death as they are scalded inside their cocoons while someone uses a stick to unravel the threads from the cocoon.  The lucky ones are spared from this nasty death by being breeders.  The threads then are made to undergo a number of processes including drying and dyeing before they are finally woven in looms into beautiful pieces of cloth.  There were an exhibit room of antique looms and weaving instruments as well as clothing and textile.  The shop had beautiful items but were rather expensive and cost more than Jim Thompson silk at Bangkok.  I’m not a silk person though so I wouldn’t know which is of better quality.

We also went to the Angkor National Museum or rather to its building and its shop as we were too much of a cheapskate to pay the $12 entrance fee.  So we just browsed through the items at the shop (beautiful but expensive) and took pictures  of the facade. 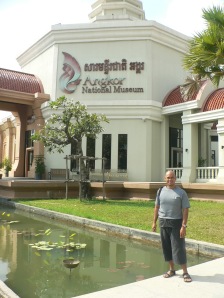 The Land of Wonders

Mariam from Couchsurfing refers to Cambodia as the “Land of Wonders.”  Indeed, it is appropriate.  From its bloody and violent past, it is wonderful how its culture and people have managed to survive and move on.  I especially loved the crafts and the markets  here.  Siem Reap and even Phnom Penh are just dripping with musical instruments that are begging to be taken home for my collection.  All I could fit in was a drum, 2 flutes, and a jaw’s harp.  The lutes are really beautiful and really cheap but no way are they gonna fit in my pack without breaking.  I already have 2 small drums and a trumpet I got at Saigon.  Oh well.  Maybe next time.

I’m done with all my shopping.  I’ve bought all my gifts (bags and wallets for my sisters)  and even managed to finally get a replacement for my falling-apart sports wallet.  Tonight, we go to the barbecue buffet so we can eat and watch a shadow puppet show.  Our remorque driver suggested this was a better deal rather than paying the same $12 at the Cultural Village for a show only.  Good night Cambodia and see you again!