3 Tombs and a Citadel

I normally don’t join tours unless transportation options are difficult and the entire process of going to where I want to go a real hassle.  But it was raining when I arrived in Hue and the threat of more rain the next day prompted me to sign-up with the tour that was on offer at the Original Bihn Doung hotel.  It was quite cheap– a bus to the tombs, the Citadel, Thien Mu pagoda, and boat back to Hue. Plus there was a buffet lunch:)

The mini bus picked me up around 8 in the morning and as soon as I got in, I suddenly remembered why I disliked tours in the first-place—-too many people in a cramped bus!  I took a seat right where the tire of the bus is which meant it was one of the tightest on most uncomfortable.  I took pity on the teenager whose knees were on his chin already when he had to move to the window seat to make way for me so I changed places with him so he could at least stretch his legs on the aisle.

Our guide spoke relatively good English (read: we could at least understand his diction) and was quite well-versed with the sights.  Our first stop was an incense and conical hat workshop along the road to the tombs where we spent about 10 minutes just browsing around. 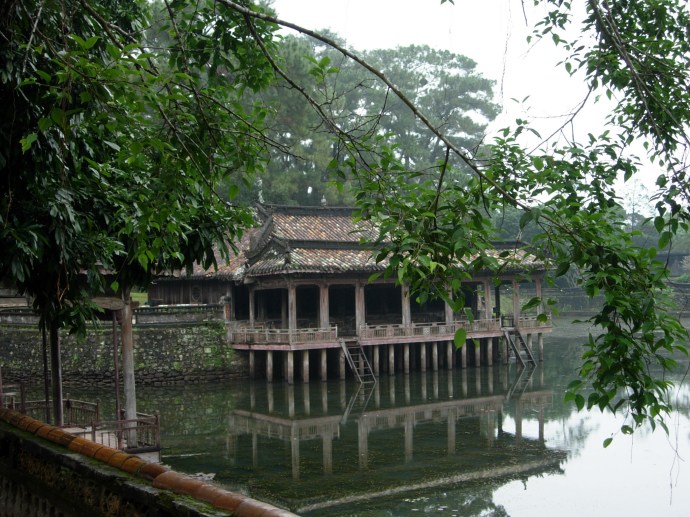 The pavilion where Tu Duc would sit with his concubines and recite poetry.

To Be Entombed Royally. Boldly challenging the idea that all material possessions are left on earth when one dies, the royal tombs of the Nguyen emperors are magnificent complexes that stand as monuments to their power.  The Chinese have always gone off into the nether regions in style and the Vietnamese surely are not to be left behind.  Only three tombs are open to the visitors and they were all palatial grounds with beautiful temples to worship the emperor and the empress , spacious halls, ancient stelles that glorified the emperor, leafy esplanades, quiet lotus ponds, and courtyards with stone mandarins and soldiers standing silently.  They all reminded me of the beautiful gardens of Suzhou in China.  It is easy to lose one’s self in the complexes for some leisurely walking or even finding a favorite spot for some Zen-like meditation.  Most majestic of all was that of Tu Duc who had more than a hundred  wives and concubines but was without offspring.  As our guide said, “with all the women around him he was unable to make anyone of them happy.”  Not only was the complex huge but it was very serene and leafy with its large ponds and walkways lined with pine trees and frangipani.  The complex was designed by the emperor himself and was used during his lifetime. 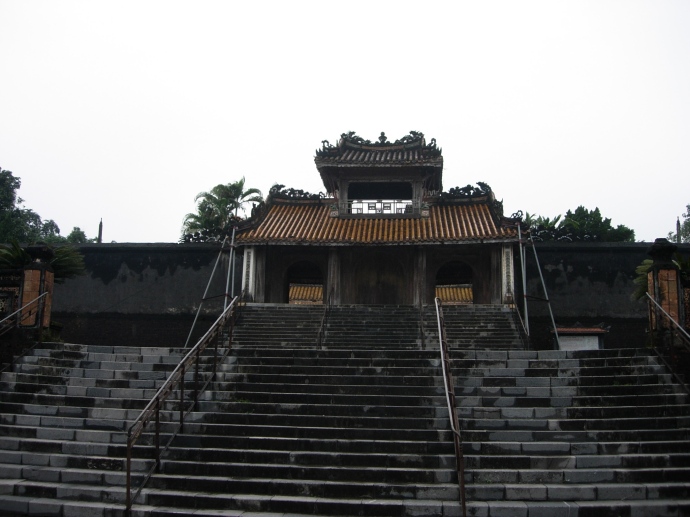 Steps to the temple where Tu Duc and his wife, the empress, are worshipped

Rivaling it is the tomb of Mihn Mang with its stone bridges and temples that blended harmoniously with the natural landscape.  Unlike Tu Duc’s where everything seemed huge, and quite enclosed, almost citadel-like,  Mihn Mang’s had a more open layout with bridges spanning ponds and temples set on terraces with the mountain as a natural backdrop.  The tomb looked like it was growing from the hills,  According to tour guide, Mihn Mang is the most loved of the three emperors as it was during his rule when the empire was at its most glorious.

The beautiful central bridge laid of marble for use by the emperor only.

What really took my breath away is that of Khai Dinh who supposedly (again, according to our guide) liked to play with men more than women.  If that indeed were true, then it would come as no surprise that the effeminate emperor would have the most beautifully decorated and most unique tomb.  Looking like a gothic structure rising from the hills, the blackened concrete structures were wonderfully carved with intricate designs. Visiting this tomb requires a lot  of stair climbing as stone steps lead to different levels of the complex.

Like the other tombs, it had a courtyard of mandarins that bore silent witness to the passing of years. 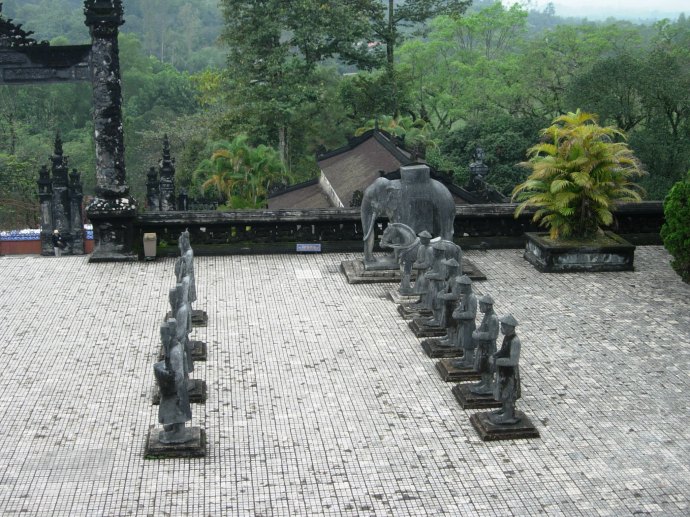 The main building was jaw-dropping with its gilted walls and ceilings and on its center was a gilt bronze statue of Khai Dihn looking so regal.  The interiors would not be out of place in a European palace.  Khai Dinh’s tomb was the last of the tombs we visited and some people opted to just stay outside its gates. 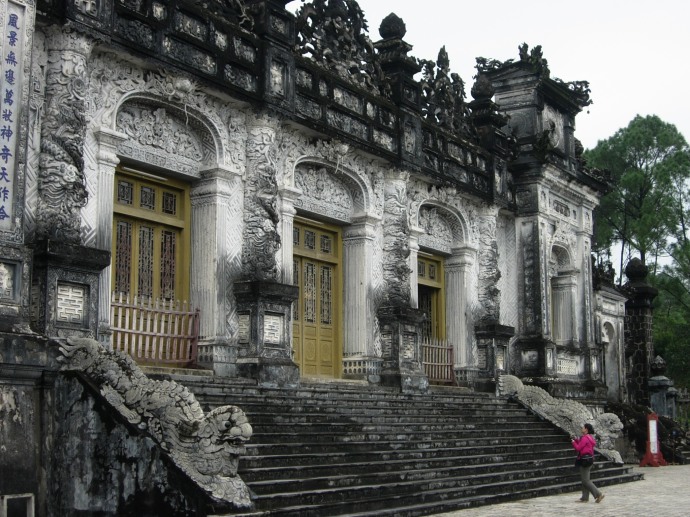 The tombs are set on the countryside among quiet villages by the banks of the Perfume River outside the main area of Hue which made for  a nice diversion from all the noise of the city.  It was way past lunch time when we arrived at the Stop & Go Cafe along the main travelers drag of the city.  The food had grown quite cold by then and we all rushed to the buffet table for some fried rice, noodles, vegetables, prawn crackers, soup, and tofu.  The food was quite bland but extreme hunger can make everything taste good especially when you just gobble it all up. Burp!

Wouldn't you like your own reading room in the Forbidden Purple City? 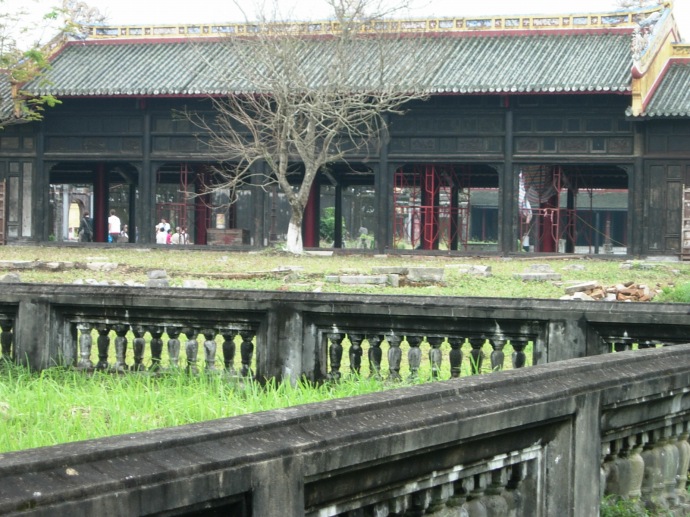 The City Within the City. Walled cities are always interesting because of their rich heritage and their unique layouts.  The Citadel is a lively city with its old neighborhoods spread around its perimeters.  Within it is the Imperial Enclosure housing the royal residences and buildings and accessed via the  imposing Ngo Mon Gate facing the Flag Tower.  Color coding was well and alive during the time of Emperor Gia Long who built the Citadel.  Anything yellow references royal use. Hence, the yellow entrance at the center, was reserved for royalty.  Today, it was the entrance for the locals.  Foreigners use the left entrance. 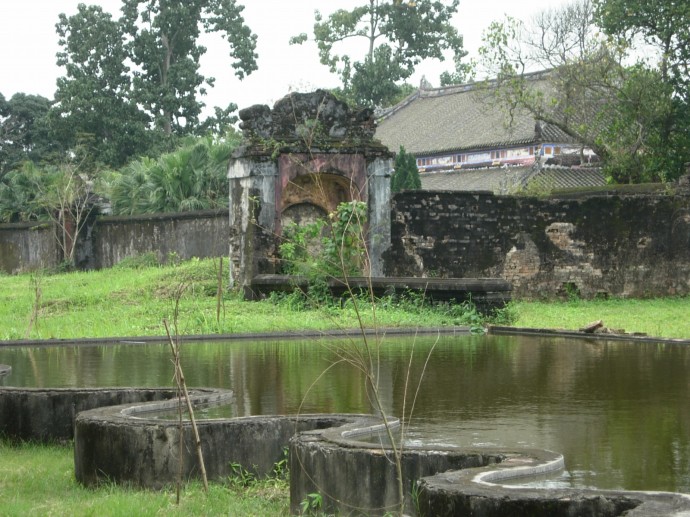 At the heart of the Imperial Enclosure is the Forbidden Purple City which is sadly no more than some crumbling walls and a couple of beautifully restored buildings like the Royal Theater which has shows on Hue’s royal music and dance and the Emperor’s Reading Room.  There was a lot of restoration going on and walkways were being built.  I wonder of the reference to the color purple.  I can imagine the city resplendent with the color of yam.  Makes me crave for some ube ice-cream.  We only had an hour to explore the Citadel so it was more of a mad dash to try to take in the large complex.  I did manage to climb up the top of Ngo Mon Gate for beautiful views of the Citadel. Again, I was reminded of why I disliked joining tours— you’re bounded by some schedule.

On the way to Thien Miu pagoda, we detoured to one of the so-called garden houses which Hue is famous for.  These houses are actually residences of well-to do locals such as the mandarins (court advisers).  They’re traditional wooden houses beautifully crafted and surrounded by a garden.

The one we visited was quite small.  The center of the house is dominated by an altar while the hallway on both sides had tea tables.  Men stay on the left while women to the right.

Final stop was the iconic Thien Miu Pagoda along the Perfume River.  The pagoda itself cannot be accessed inside.  More interesting was the monastery behind it with its serene garden and novice monks trimming the bonsai plants and sweeping the courtyards.

We boarded a large boat for the ride back to the city where we disembarked at the dock near the backpacker district.