We arrived in Jogyakarta at around at past 3pm already.  Getting your luggage and ambling towards a driver holding a sheet of paper with your name on it is one of the pleasures of booking airport pick-up.  Haggling with a taxi driver at an airport is one of the best ways to get your temper going.  To save on cost, I simply rented the vehicle for 6 hours to include airport pick-up, a trip to nearby Prambanan, Sono Budoyo Museum for wayang kulit, and then drop-pff at Wisma Ary where we were to spend the 2 nights in Jogya.

Our driver, Hanya, was a dark middle-aged man wit graying hair, in between his decent English and my Bahasa-Indonesia, we managed to communicate with each other with relative ease. 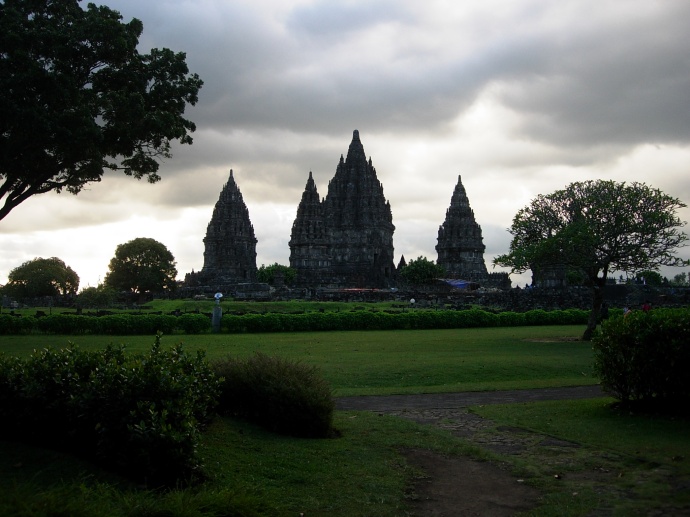 We arrived in Prambanan a little past 4, paid the entrance and hired a guide (Rp 60,000).  I had never hired a guide at any site before mainly because of the cost; but since there were four of us, it was cheap.  The temple complex is in Prambanan village and where the parking area and shops were used to be a village that was relocated. 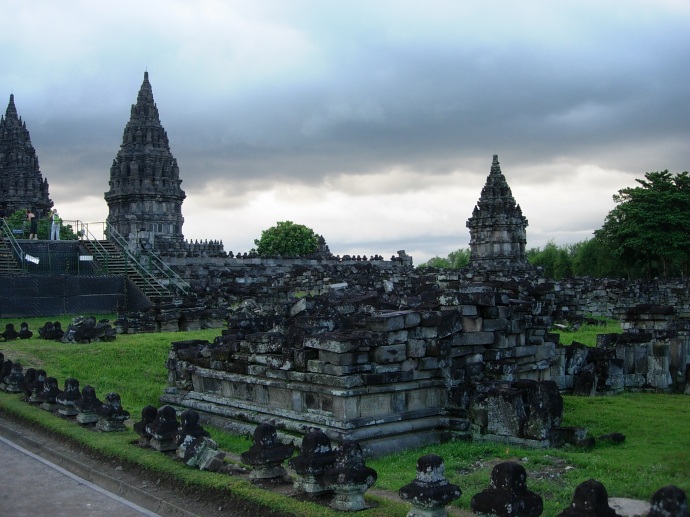 I knew nothing about Prambanan except that next to Borobodur, it was one of the most important temple complexes.  It is said that Borobodur lies horizontally expansive while Prambanan is vertical. The towering candi carved with beautiful relief stood magnificently against the afternoon sun.  There were no tourist buses and except for a smattering of other camera-toting tourists, we had the place virtually to ourselves. With an overcast sky, it was very cool walking around the grounds.

We entered the candi of Brahma, Shiva Mahadera, and Vishnu, the three gods comprising the Hindi trinity.  It was dark and damp in the innermost chambers housing the large statues of the gods. 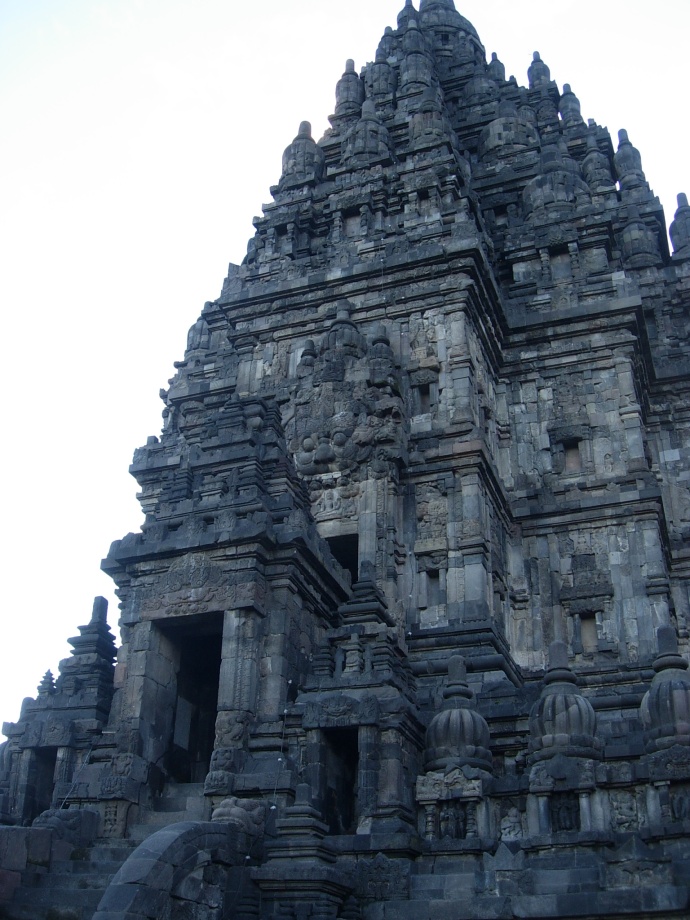 The guide was excellent as he explained a lot of things about Hinduism and Buddhism which made us appreciate the temple complex.  He pointed out the ruins of what was once 20-plus temples which fell down during the 2010 earthquake.  Moving to a low wall, he showed us how the stones were all assembled without using any plastering or cementing material.  They were simply joined together with raised wedges on the surface which allowed the stones to slide against each other.  Newer stones were marked with nail heads.  He also knew the best spots for taking pictures.  He would rush to a spot, form a box with his fingers and say “take a picture here.” 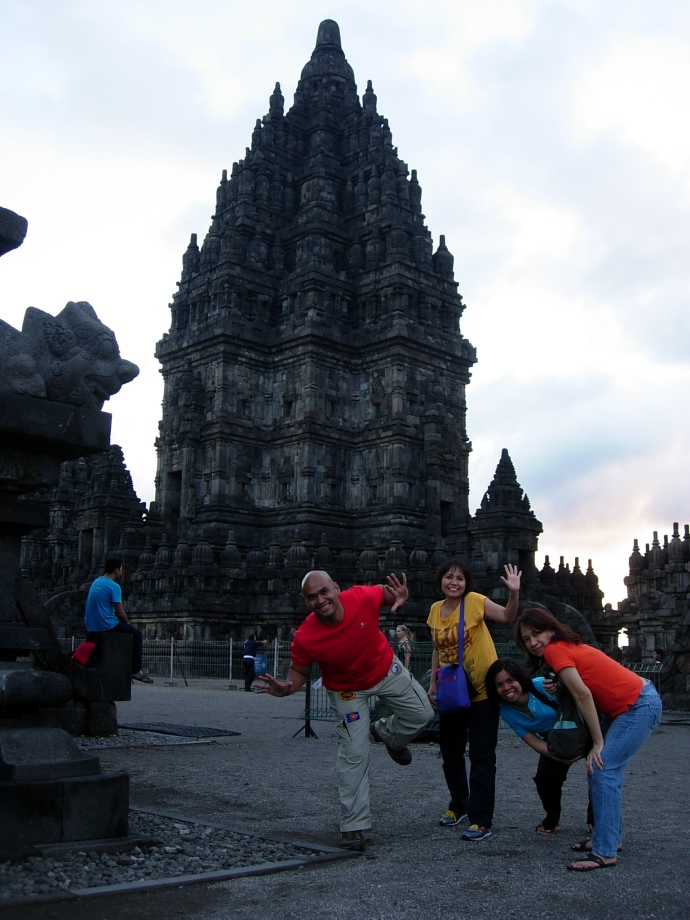 Like any Hindu temples, the candi in Prambanan are adorned with bas relief sculptures of dieties, apsaras, and scenes from the Ramayana. 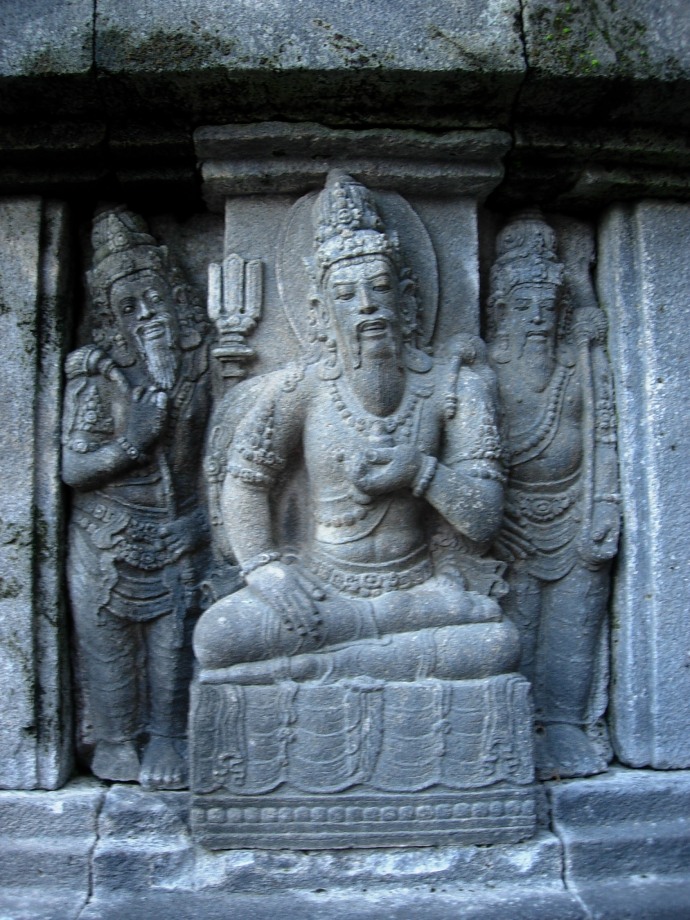 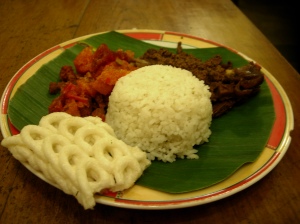 Good Gudeg.  “Saya mau makanan yang istemewa di Jogyakarta tetapi tidak terlalu mahal,” I told Hanya.  At Jogyakarta he brought us to a street lined with rumah makan (literally “house of food”) serving gudeg a slushy-looking concoction of jackfruit served as a side dish to your choice of viand such as ayam (chicken) and sapi (beef) and other unidentified looking stuff all served with nasi putih (steamed rice). We took our seats on one of the tables inside and started munching on the krupuk in a large glass container shaped like a lantern.  The girls didn’t seem to be too excited about the food.  As after the masakan padang experience in Jakarta where the food was simply picked from the trays on display and served without being heated, they had been hankering for hot food.  The gudeg looked a little icky as it was greyish and didn’t look a bit appetizing but it was really good and went well with the rice.  Judging from all of the rumah makan, the dish seemed to be a Jogyakarta specialty.  The chili beef skin like what we had earlier in Jakarta wasn’t as good though.  We washed down our meal with Teh Botol, the Indonesian equivalent of bottled iced tea.

Hanya came back to tell us that being a Sunday, there was no show at the Sono Budoyo Museum and that we can go see the Ramayana at Purawisata instead.

“You’re going to be sorry for not having dinner here instead,” Rhoda told me as we passed by the dining area where the 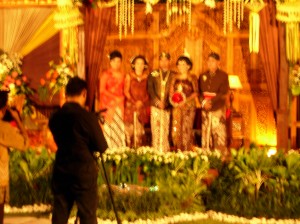 The couple flanked by who I assume to be their parents

buffet was.  For Rp 120,000, I was ready to give it a pass even if the food did seem yummy.  On a stage set in the middle of a garden was a photo session of a wedding with everyone in traditional Jogya finery.  The clothes were stunning and everyone looked so regal.  The family looked like they were well-off as everyone was so richly dressed and when we passed the garden again after the show, there was a separate pavilion where the bride and groom and immediate family members were having a post-party dinner.

The Ramayana cost Rp 120,000 each with a free bottle of mineral water.  We were led to an outdoor auditorium with cement bleachers covered with mats .  The bleachers near the stage had already been reserved for tour groups which I assumed were the ones having dinner.   Billed as the longest running Ramayana show having been staging the dance nightly since 1976, the Purawisata version is supposed to be one of the best. 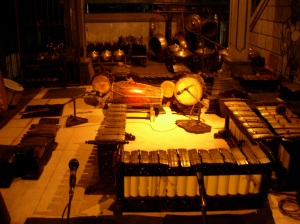 The gamelan at the side of the stage

The show started with an elderly man performing a blessing ritual and putting heaps of flower petals on the four corners of the stage.  The gamelan orchestra on stage left started the music and out came Rama, Sita, and Lacsamana.  Sita was a little on the heavy side while Rama looked very lean.

The dance tells the story  of the Ramayana in a condensed version.  The little white monkey, part of the troop of Hanoman was a darling.  He climbed on top of the wall and on the roof a little pavilion and seemed to have antics of his own the way a real monkey would do.

In slow graceful movements the dancers expressed a gamut of emotions despite having expressionless faces which characterized the Jogyakarta style of courtly stylized movements.  The show took about an hour and a half.  The auditorium was only half-full and I was a bit tempted to grab a mat and set it down on one of the side bleachers and lie on my side. 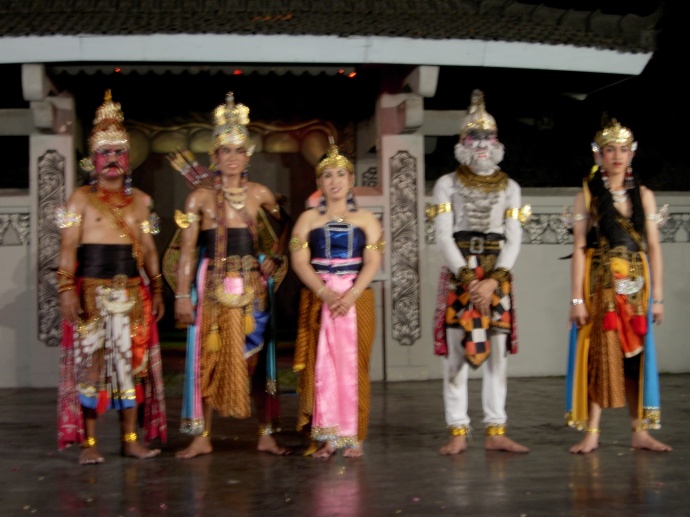 It had been a long day and we were glad to finally be dropped-off at Wisma Ary. 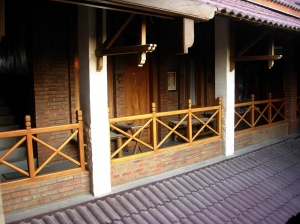 The place was beautiful as there were open patios everywhere and the garden-like setting and atmosphere gave the entire place the feel of a resort.  We stayed at a family room which had a double bed, one single, and an extra cushion.  The room could use a little more light though as there were dark corners.  The cute bathroom brought a smile to our faces as it was painted in psychedelic colors with the shower stall shaped like a large flower blossom. 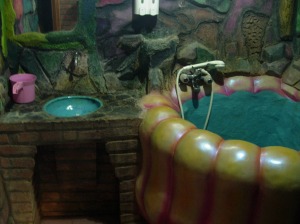 There was a wide veranda out front with cushioned benches you could relax on.  The staff set a tray with cups, some tea bags, a thermos, and a plastic water container. 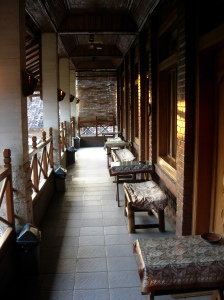