First time experiences are always the most exciting.  When traveling, whether in foreign soil or in domestic shores, these firsts almost always the ones that have the most lasting memories.  Inevitably, the firsts are usually followed by seconds.. and thirds… and…

First time to travel alone.  Thanks to Cebu Pacific’s cancellation of their Hanoi flights when they first launched it way back in 2009, my traveling companions and I decided to go our separate ways and re-route our flights.  They chose Singapore while I chose Malaysia and Bangkok.  I had a really tight schedule as I crammed KL, Melaka, Penang, and the Cameron Highlands in less than a week so I could spend my New Year at Bangkok.  Thank god for Malaysia’s efficient transport system I managed to get from point A to point B hassle-free.  Did I feel lonely traveling alone? Nope as there were other travelers I met such as  a Vietnamese, a Japanese, and a some Germans I shared a bonfire with at Kang’s Lodge in the Cameron Highlands.  New Year’s Eve in Bangkok, a British guy chatted me up at Richard’s in Silom.  You’re never truly alone unless you opt to stay away from everyone. 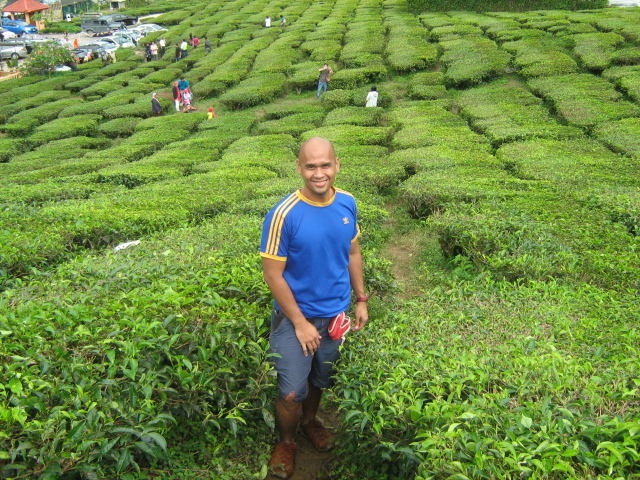 Tea.. tea... as far as the eyes can see. In the Boh Tea Estate in the Cameron Highlands

First Christmas From Home.  There must be something about the sand and the sea as my Christmases away have all been at the beach.  I was only in high-school then when my mom packed all of us kids and come church friends to some beach in La Union.  It was our first Christmas away from home.  We had the usual Christmas dinner including lechon but it had none of the rowdiness and fun that we always have at home.  Rowdy was the stampede to get inside the church for the final mass of the Simbang Gabi.  I still remember gathering with the throng of people at the small plaza fronting the Agoo Basilica.  Close to midnight, the church doors  flung open and people stampeded inside.  My sisters and I managed to get a to a precious pew where we spent a good part of the mass nodding off to sleep.  It didn’t help that the entire mass was said in Ilokano.

This stream is for fairies. Fairy Stream, Mui Ne, Vietnam.

The quiet beach of Mui Ne in the south-west coast of Vietnam is hardly the place to spend Christmas.  It was my first Christmas away from home and from family. Except for a thin Santa Claus and some attempts at Christmas decorations in the bigger resorts, it could have been any other day. Missing were throngs of people you would expect on Christmas Eve.  Some Caucasians were all dressed-up for some fancy dinner in one of the better restaurants. My friend and I just had dinner at the cheap Vietnamese eatery we had been eating at for the past couple of days then had some drinks at one of the bars.  I turned in early that night as there really wasn’t much going on.  I did miss having Christmas at home especially since I do most of the cooking and I love to cook for other people.  Still, it hasn’t stopped me from getting on a plane to somewhere to spend my holiday vacation.  Last year, Christmas was in pretty Hoi An (Vietnam again!) where I feasted on a set meal of Hoi An’s specialties all for less than $5!

First in the US of A.  Who doesn’t dream of going to the US of A?  Call me colonial-minded or brown-skinned American but Krispy Kreme, Hollywood, and burgers and fries has got me convinced that I gotta make a stop here somehow.  I gotta thank my job for this one as it paid for my airfare and a couple of days of expenses.  My introduction to Uncle Sam?  Rockin’ Las Vegas!

If getting a US visa is like winning the lottery, then actually setting foot on this most precious of soil and getting past immigrations is almost akin to knockin on heaven’s door.  Only in this case, it was furnice-like hot!  It was a hellish 39 degrees when I arrived.  Stepping out from the cool terminal onto the desert heat, I had to literally jump back in as the heat slapped me on the face.  Hard.   The air was so dry I had to buy lip gloss to soothe my charred lips.  Later on in the evening as I stared at the light and sound show at the old downtown, I kept muttering, “I’m here!  I’m here in the US!”

First Vietnamese Motorcycle Ride.  I’ve been on the back of a motorcyle a couple of times.  Once on a rough unpaved road that wound up the mountains in Surigao and another in Panay.  I was headed to some mountain villages for field work.  The track was better fit for goats rather than any form of transpo but the driver was careful and seemed to know how to manage the ride. Still,  even on paved roads  heading to a late meal of strin gray in Fuene Osmena St.  Cebu and checking out an exclusive resort-type accommodation in  Siem Reap in Cambodia, I had always been white knuckled.

Given my fear of motorcycles, I vowed never ever to attempt to ride on in Vietnam.  Anyone who has seen how the Vietnamese drive their motorcycles , especially in the cities, would know that riding one amidst them is not for anyone who values their lives.  I’d take a slow cyclo anytime. But things don’t usually go the way you plan them to be.  Especially when you’re in Vietnam.  And most especially, when you’ve arranged to meet-up with a local.

The friend I had met at a travel networking site drove-up to me  on a— what else?— a moto and told me to hop in.  I couldn’t say no because: (1)  He promised to take me to a really good place for Hue’s specialties and (2) Him riding a moto while I followed on foot is definitely stupid. With a prayer to my lips and a thumping heart, I rode on the back of his scooter and told him to keep his speed to a 40.  I had my fill of bahn bao and arrived back in my hotel in one piece.

Yummy "bahn bao" at Hue. This is worth overcoming your fear of getting on the back of a moto.

It was really out of necessity that I reluctantly strode on the back of a moto in Sapa. I had made my way on foot to the H’mong village of Sin’ Chai and wasn’t very excited to go back on foot as I had hurried away from a dog that came rushing out from one of the houses.  If you must know, I am deathly afraid of dogs especially when they’re out on the streets.  A woman had found someone to drive me back to the town.  With half of the village assembled and amusingly watching me,  I played strong, managed a nervous giggle, and waved good-bye.  “Please.. not fast, ” I whispered to the middle-aged driver.  It wasn’t half as scary as I thought it would be considering the narrow and twisting path we had to take before we hit the main road back to town.  About 10 minutes later, I was dropped off at the back of the market, a little white-knuckled but less afraid.

It's not bad lighting. It's the thick fog. H'mong of Sin Chai. Sapa.

Bored and with nothing to do in town, I took the offer of a moto driver to head to the waterfalls.  “Not too fast, ” I whispered again.  The burly driver was very nice and kept to a comfortable speed and allowed me a few stops so I could take photos of the mud houses along the winding road out of Sapa to the Silver Falls. It’s interesting how one can rapidly jump from being deathly afraid to being excitingly wanting to ride a moto.  By the time I got to the falls and taken my pictures, I had thrown all fear to the wind and when the driver asked if I wanted to go to a village further out, I readily said “yes!” Back in Hanoi, I was hopping at the back of motos whisking me around the city.  If it weren’t for the time constraint, I would have probably hired one of those Harley-Davidson guys to take me from Hanoi all the way to HCMC!

I’ve been riding motos ever since.  It’s cheap and some drivers make really good guides.