Gita had left for Kompong Cham in the morning enroute to Siem Reap for New Year’s Eve.  But as luck and Do Yok’s popularity would have it, another traveler joined me to the trip to Andong Meas to visit the Jorai cemetery.  Tall and bespectacled Matti, had arrived in Banlung the previous night and had contacted Do Yok for a 50day trk on the recommendation of his friend.  Since Yok was still “mine” for another 2 days, he opted to just join me in my trips while finished Yok’s services with me.  Again, I had someone to share the $20 boat trip downstream to the Jorai village which would significantly help lower the cost of the trip.

We picked-up Matti at his guesthouse along the main rode at 8 in the morning.  I rode with Kun this time.  He was more appropriately dressed this time with Crocs-like slip-on rubber sandals.  Yesterday, he was in a long-sleeved shirt (well, which Khmer isn’t in long-sleeves), wool trousers, and leather shoes!

Like all the roads out of Banlung, asphalt soon turned to dirt.  The dust on the way to Voensai was nothing compared to what we encountered heading to Andong Meas.  Back at the lodge in the evening, my brown trekking pants had taken on an orange tint.  By this time, I had long given up on laundering my own clothes and submitted to having it laundered instead.  No way was I gonna trouble myself washing all that dusty from my clothes.  It was hard enough soaping yourself clean.

We stopped at a village to see a long house and a boy and girl house that was built by the village for themselves and not something built for tourists.  The cries of a little girl greeted us.   Apparently, her right foot had caught on the spokes of the moto wheel she was riding.  Ouch and super ouch!  People huddled around her while her mother held her in her arms.  I couldn’t bear to look as the guy wiped the wound clean with a piece of cotton dipped in some solution. It all seemed quite professional as he had on a face mask, rubber gloves, and a scissors-like gadget to hold the cotton ball.

It's a long longhouse

The longhouse is old and derelict and hadn’t been used for a long time. There were holes on the ceilings but the plank floors were still sturdy.    On one side of the longhouse were several small rooms all accessed by a wide corrider running the length of the house.

Yok explained that the girls’ rooms were at the far end near the door so if a boy should come visiting, he wouldn’t disturb the others.  It seems that pre-marital sex is accepted in Tompoun culture.  That became evident when Yok explained that should someone want to sleep with a girl in the village, he would have to ask permission from everyone so that should the girl become pregnant, everyone would know who the father is. 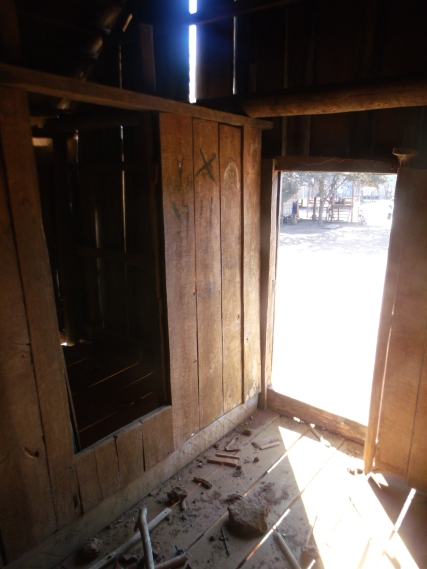 This is the girl room beside one of the entrances.

Also interesting were the boys and girls houses built just outside the longhouse.  More of a room really than a house, these separate facilities are for single boys and girls where they come to meet and apparently, per Yok’s story, mate.

Boys on the left and girls on the right

Yok and I bought some nicely decorated gourds from some women resting underneath the house.  The gourds are water vessels and have pretty designs on their bodies.  It really is a tradition of incising designs on the gourds and is not just a tourist thing.   I would have wanted to buy the one that had designs depicting the dead and the funeral rites but it might spook people back at home.

Kun was surprised when I went to the moto to get my wallet from my backpack.  He told me that I shouldn’t leave my bag just lying around especially if I had money in it.  I dunno but I have it in my head that no one in a village such as this one would steal anything .  Maybe I’m just too trusting with these people.   I wouldn’t leave it lying around in Banlung that’s for sure. 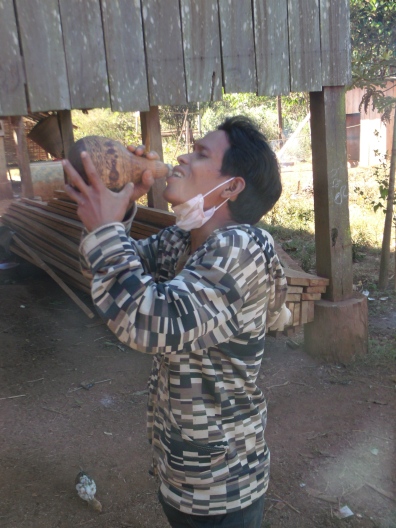 Yok drinking fro a gourd he had taken from a villager who had just refilled some vessels from the river.

We stopped for lunch at a small eatery along the road.  “Toilet?”  The guy manning the counter topped with pots of food shook his head. Yok and Kun pointed to the dirt lot behind the eatery and said I could piss there.  I was too embarrassed to tell them I was going to more than piss.  I had began to feel the first pangs of an upset and churning stomach.  It was probably the lunch at Pov Sochey yesterday.  Fortunately, there was a modern gas station just across.  “Toilet?” I asked and was promptly pointed to a concrete row of relatively clean squat toilets behind the main building.  Now, pooping on a squat toilet especially if you have knee issues isn’t exactly easy.  What more if you’ve got a bad case of the runs.  Imagine . . .

The others were done with their lunch by the time I emerged from the toilet all smiling and good to go.  A loperamide pill did the trick for the rest of the trip.

Lunch was quite good, by the way.  The Chinese eatery had pots of cooked food but I chose a hot stew of fried pork cracklings and vegetables warming on a large cauldron over a fire.  The soup was especially tasty but all that pork cracklings made it greasy.

Gems from the ground.  From the main dirt road, we took a left up a small dirt road to a small gem mining area in Bokheo.  Tattered tents were erected over small holes bored through the ground.  A few men and women squatted in enormous mounds of soil patiently sifting their hands through the dirt.

Everything was done very crudely.  It was obviously hard work as the men had to dig a hole several meters deep into the ground then burrow horizontally sending buckets of dirt up to be sifted for gems.  Kun explained that people worked as families as a high-degree of trust was needed.  You wouldn’t one anyone running of with your gems from all that dirt you gathered from beneath the earth.  We were invited to go through the dirt though I wouldn’t know a gem nugget if it hit me on the head.  A woman came along and showed us some cut gems that sparkled in the noon sun.  They were all very colorful and shiny but who knows if they were just colored glass.

To die a Jorai.  I had read at Lonely Planet that the cemetery had been badly damaged by typhoon Ketsana a few years back.  This was evident as most of the graveyards seem to have been thrown apart.  Compared to the Tompoun cemetery in Kachon, this one was more simple and less colorful. There weren’t much carved effigies.  What makes Jorai cemeteries unique though is that as much as six people are buried together in a single graveyard.  A couple of young kids followed us and we paid them the 5,000 riyel admission.

Back to the boat and we crossed to the other side to the village.  A vendor had arrived there with his moto laden with tools such as knives and lots of toys. Mostly everyone had gathered around him checking out his stuff.  The houses look similar to that of the Tompoun except that there’s just a single house rather than having a separate kitchen and a rice barn.  I joined Kun and Yok at a gathering of men and women who were all drinking rice wine.  Matti had drunk several cups already and offered me a sip.  It was so strong! Inquiring about instruments, the villagers said they had none.  One man offered to sell his gong set for $500.  I politely told him I would rather pay to hear him play it. 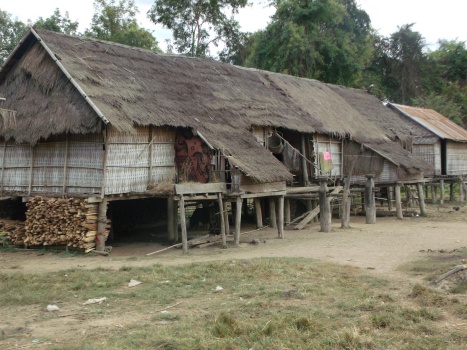 Gold in the river.  Back to the boat for the ride downstream and to the Lao and Chinese villages at Andong Meas.  Enroute, we stopped by the banks to watch women and kids panning for gold in the murky waters of the river.  It was pitiful to watch really small kids under the blazing sun scooping up ground and panning them hoping to see that gleam that would indicate gold.   I watched silently as they went about their work.  Suddenly one small girl looked up at me then went back to her work.  I still remember her round beautiful eyes accentuated by the krama wrapped around her head to keep the sun out.  At that moment, I felt extremely uncomfortable.  I was a spectator to her hard life.  Like so many that had gone and watched before me, I would simply see then go back to my own comfortable life.  I went back to the boat, gingerly stepping around the bowls that contained some black sand that Kun said contains gold, mindful that upsetting the bowl would be upsetting their hard work and the future that clings on it.

Back to Andong Meas and back to the moto. On the way back, at the highway to Banlung, Yok had a flight tire so Kun and I went ahead.