Phnom Pehn is a place that grows on you. Some people stay a couple of days then move on to other destinations in Cambodia.  Other simply miss it while a few just downright hate it.  Sights are few and far in between but like small cities, Phnom Pehn is best experienced slowly just lounging around and enjoying the laid back atmosphere.

Arriving early evening from an 11-hour bus ride from Banlung on January 1 isn’t exactly the best way to come re-visiting (see earlier blog “Surving an 11-hour ride bus ride in Cambodia). And having my friend who had just arrived sleep half the day off then go back home the next afternoon due to a dog emergency isn’t exactly a good way to start off the second leg my trip but fortunately, Phnom Pehn had enough charms to keep me happy.  The 3 and a half days I spent there after my friend had gone back to KL was downtime for me simply relax, re-visit my favorite sights, and simply chill-out with a few adventures thrown in. 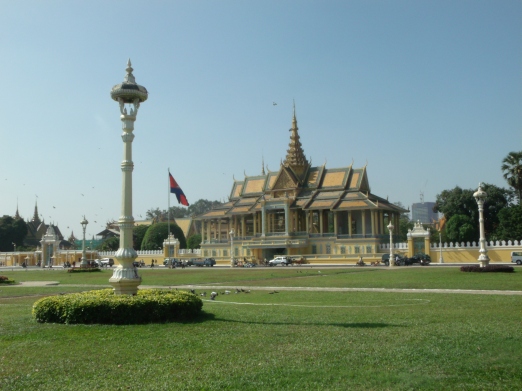 The golden spires of one structure in the Royal Palace complex 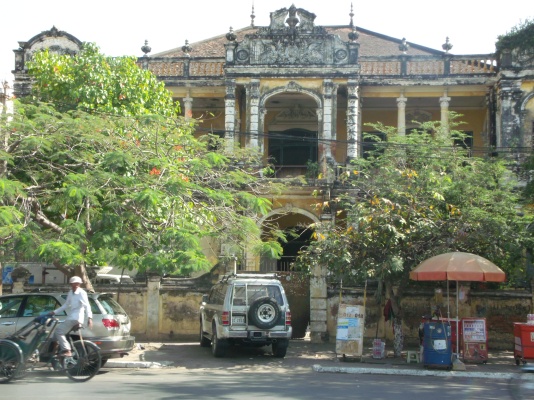 Phnon Pehn has nice grand French colonial-era buildings. This one is just beside Bright Lotus Guesthouse near the river where I stayed for a night. 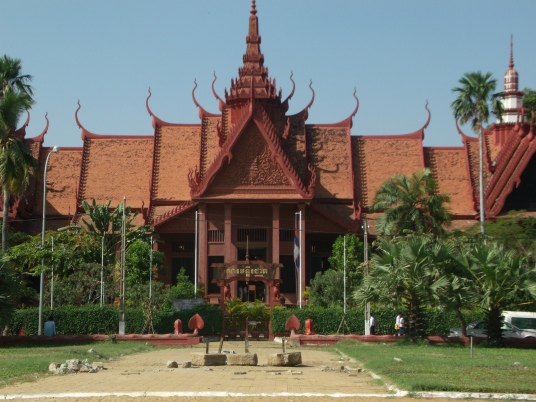 On the side of the National Museum and the Royal University of Fine arts is St. 178 with its painting and stone carving shops. It makes for a nice afternoon stroll just poking around. 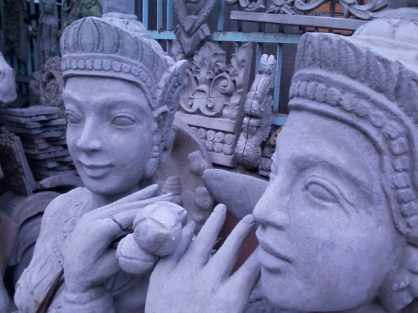 It may not be Angkorian era but these statues silently awaiting takers are nevertheless beautiful. 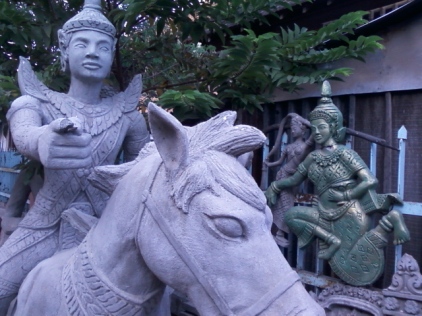 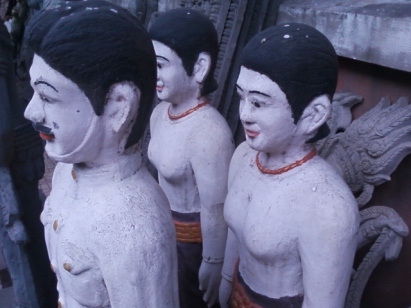 Central Market was under renovation a couple of years ago when I visited so only its beautiful Art Deco facade could be appreciated.  It’s open and in full-swing now and the magnificent dome has been restored in all its grandeur.  Less inspiring are the jewelry and souvenir shops.  I bought a couple of stringed instruments (tro) a hand drum (thom) and a pair of small cymbals (chhing) at one of the stalls.  The girl was so appreciative of the sale she had made, she gave me a free bracelet of wooden beads.  The girl selling textiles nearby kept offering me sarong, scarves, and other stuff. I told her I still remember buying a couple of table cloths from her a few years back (which was true). 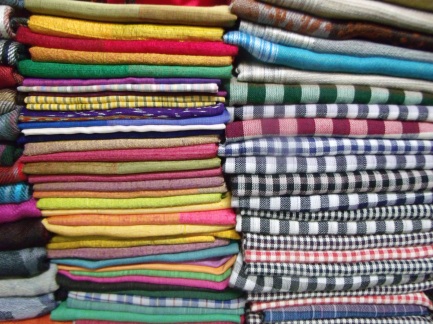 Krama for sale at the Psar Tuol Tomg Pong 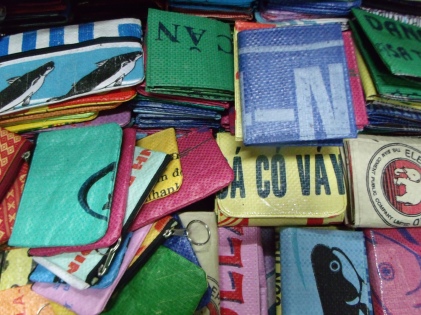 Cheaper and more varied is Psar Tuol Tom Pong otherwise known as the Russian Market which was a bit effort to go to with the moto I flagged from the street (that deserves a post of its own).  Forever in search of traditional music instruments, I found a couple of stalls that was heart-in-your-mouth moment.  One had all these big stringed instruments while another had different gongs both flat and bossed one. I snagged a set of 5 flat gongs which required a lot of effort going to the owner’s house/warehouse to check the instruments than to my guesthouse to get my atm and withdraw some money for payment then back to the market to secure a 6th gong from the neighboring stall; all this time accompanied by the owner’s daughter who made good company.  Her English was good and she was in law school at the Royal University of Phnom Pehn.  I drooled at the sight of so much stuff for sale at the house whose ground floor had been converted to a warehouse.  The grandmother (who didn’t look very old) was very accommodating and even sold me three old tro for just $30. 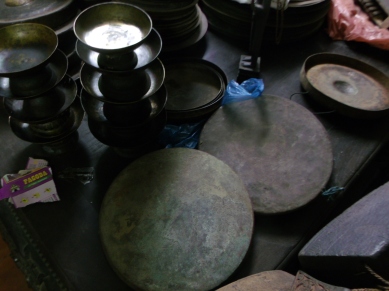 The best spot in Phnom Pehn is undoubtedly Sisowath Quay thoughparts of it especially near the Tourism Office has rubbish.  I spent a couple of afternoons just watching the boats pass the Tonle Sap.  Nice chill out moment with locals enjoying the cool breeze.  The stretch across Blue Pumpkin and heading to the restaurants makes for a nice walk in the evening.  Arriving on the evening of January 1, I was originally booked at Kha Vi Guesthouse near the Cambodian-Vietnamese Monument but a non-working a/c made me transfer to Narin Guesthouse where I had stayed before.  More expensive but better value and near the riverside. 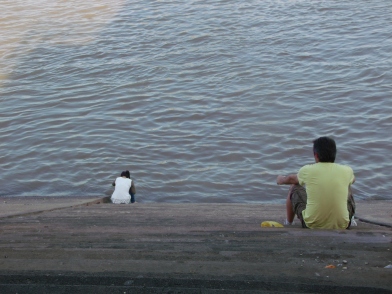 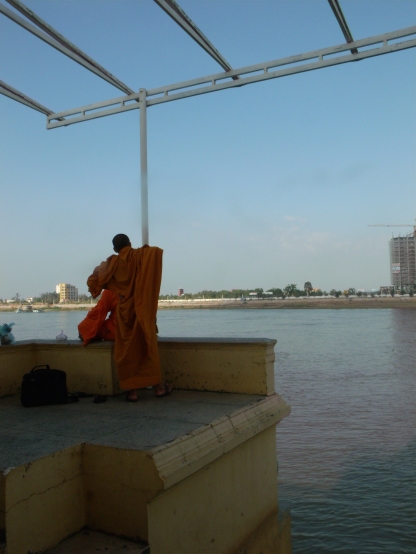 Of course, a Phnom Pehn day always ends at my favorite favorite place to indulge my sweet tooth. 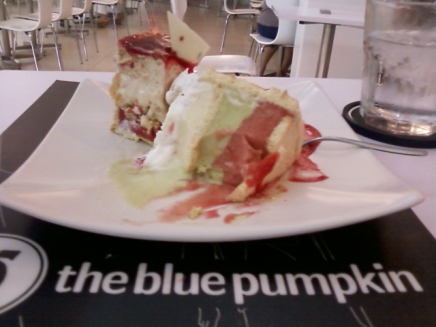 I couldn't choose between raspberry or strawberry ice-cream cakes so I took both. The waiter seemed perplex looking for two people who had order it. I waved him over and discreetly transferred the cake to just one plate.

So You’ve Done It All. What Next?

Here’s my favorite chill-out moments in Phnom Penh. No rush.

1.  Go through the books at Monument Bookstore in Noridom Boulevard then head to the second floor for some cakes or ice-cream at Blue Pumpkin.

2. If you really like books, then Phnom Pehn’s second hand bookshops are worth a peek.  There are some worthwhile items and makes for a nice diversion if you’re walking from point A to point B under the scorching sun like me.

3.  Watch the world go by at Sisowath Quay.  Bring some snacks and drinks and sit on the ledge.  Perfect way to spend the late afternoon when it’s cooler.

4.  End the day with ginger ice-cream or a cake at the second floor of the Blue Pumpkin front Sisowath Quay.  The huge white sofas are perfect but I’d rather watch the street action on the street below and at the quay across.