Eat or Not Eat: EAT!

I’ve been to Melaka twice and both times I have  failed to get in.  I have not heard of Restaurant Famosa along Jonker Street but the long lines, strategic corner location, and tantalizing picture menus out front somehow meant that it was one of the best places to eat in Melaka. In a place famous for its cuisine, being one of the IT places to eat means something really good is cooking inside. 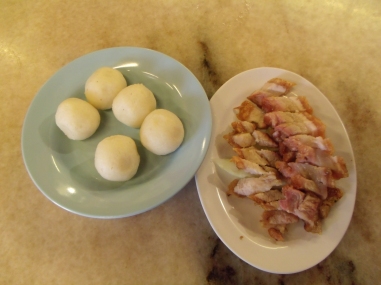 If salt had a flavor other than salty this would be it. Flavorful saltiness, perhaps?

On my third trip to last January I was determined to finally eat here and this time I had a winning chance.  Staying in Melaka for three days which meant being able to beat the lunchtime crowd.  Fortunately, Restaurant Famosa opens at 9:3o in the morning.  At 10:30, there was hardly anyone there but the two people in the roast counter were busy packing roast duck meals in styoropore lunch kits. The middle-aged guy in a white boat-hat and apron was busy carving-up the duck while the other packed it with a large cup of steamed fragrant rice.  There must have been about a hundred orders as rows and rows of neatly packed lunch kits placed in large plastic bags lined the tables behind them.

I’m not a fan of chicken rice as the white chicken flesh makes it look so raw.  I settled for the roast pork with 5 pcs of their famous rice balls and a bowl of fish ball soup.

While waiting and since there weren’t much people, I went on a mini tour of the spacious restaurant which was a converted shophouse.  Marble-topped tables and chairs were neatly placed in the common area while an enclosed space with carved windows was reserved for private dining.  At the far corner near the restroom was a row of Chinese royal costumes for rent for a photo-op at a made-up imperial throne and background.

I liked thesquare marble-top tables with wooden legs. They look like the ones in traditional Chinese tea houses. 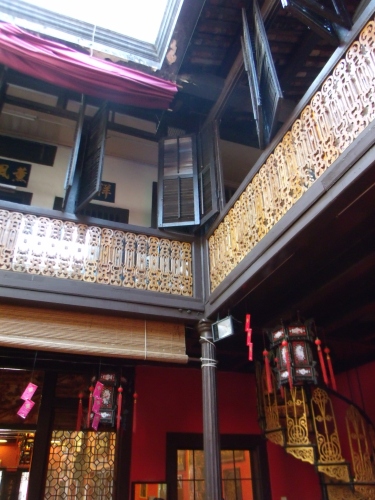 I should have stayed here so people wouldn't see how much food I was eating.

It didn’t long for my food to arrive.  The rice balls weren’t just any ordinary steamed rice formed into compact balls.  The rice was a little sticky and very fragrant and tasty.  It perfectly complemented the roast pork.

The pork was sliced thinly and had really crispy skin I  could feel it crackling between my teeth while I relished the tender pork meat. It had a salty bite to it that was very flavorsome. If salt had a taste other than salty, that would have been it.  I had yet to finish my entire serving and yet I was already making plans of coming back the next day for more while all the while contemplating of having an additional order of  barbecued pork.

It was too late when I realized the fish balls in the soup were just the ordinary fish balls  and not something more exciting.  The soup was good anyway and came in steaming hot in a large white bowl.  I should have taken the suggestion of the order-taker to try the wanton soup.  The picture of the fish balls made me think it was something akin to a wanton.

My favorite topping is the green one.

And in Melaka, what perfect way to end a meal than with a bowl of cold cendol.  Unlike the watered-down version available in some stalls, this one was quite thick with coconut cream and was heaping with condiments.

I had a really really good meal and thoroughly enjoyed it so much that I went on my last morning in Melaka for brunch before heading to the bus station for the trip back to KL.  Never mind that I’ve already had a Nonya rice dumpling and a popiah at Poh Piah Lwee. I just had to tuck into my taste memory the flavorful saltiness of the roast pork, the fragrance of the rice ball, and discover the barbecued pork.

I went to the much smaller restaurant just beside the larger one.  It was almost 11 so there were more people.  A group of women who seemed to have come from Singapore occupied the next table. While a Malaysian Chinese couple sat across me. I threw all embarrassment to the wind and ordered a plate of roast pork and a plate of barbecued pork. Halfway through the meal, I ordered an additional two rice balls as I was about to finish the five I had ordered. Of course, a cendol ended the meal.