On a Yahoo News article dated Aug 23 and written by Kim Arveen Patria of the Southeast Asia News Room, it was reported that the Philippines is losing some of its languages.

“Online database EndangeredLanguages.com showed that at least 15 Philippine languages are not only becoming less known but are also being forced to extinction by more widely used regional languages.

For instance, Isarog Agta, formerly used by communities living near Mount Isarog in the Southern Luzon province of Camarines Sur, only had six native speakers in the year 2000.”

The database uses information from the University of Hawaii’s Catalog of Endangered Languages and Eastern Michigan University’s Institute for Language Information and Technology.   Aside from Isarog Agta, “at least five other languages in the Philippines may soon be lost and forgotten, while two others are “threatened” and two more are “vulnerable.”  Together with Isarog Agta, the other  languages in danger of being lost and forgotten are: Sorsogon Agta, Lake Buhi Agta, Camarines Norte Agta, Batak, and Atta.  Listed as “threatened” are Dupaninan Agta from Cagayan while Manobo and Souther Alta are “vunerable.”

It is not surprising that all these languages are spoken by so-called “minorities” or indigenous people.  As to the reason why these 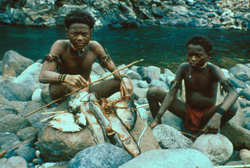 Agta hunters. Photograph downloaded from http://www.picturesofrecord.com as found in the work of P. Bion Griffin.

languages are declining, the report lists the shift towards the more widely spoken Tagalog and in the case of the population living in the Bicol peninsula, to Bicolano.

Indigenous people have always been marginalized in every way— be it the way they look, dress, behave, perform rites and rituals, and of course, the way they speak.  They have always been the poorest of the poor and have been victims of injustice  through armed conflict, land-grabbing, and even in their everyday lives.  With no access to opportunities that should have been their human right, they either die, in the case of the Batak of Palawan, or assimilate, in the case of the Agta.

Shameful.  While the rest of the urban population, particularly in Metro Manila, try their darnedest best to acquire faux American accents, our native languages are dying.  It is easy to dismiss these languages as mere antiquated vestiges of a bygone era that, for most of us, have no practical meaning and place in modern human society.  Wrong.  Languages are spoken by people.  There are only two reasons why languages die out.  One is the speakers have simply died.  And the other is the speakers have stopped speaking it.  Both cases point to a social problem that is rooted in social injustice.  In an age with advanced health care and sciences it is unthinkable for an entire population to die out. Not unless that population has no access to basic services such as medical attention, clean water, and a safe living area.

Why then do they stop speaking it?  It is easy to point to culture processes akin to Darwin’s survival of the fittest.  That the speakers have shifted to a more widely-spoken language for better acceptance in a larger wider society.  Acceptance rather than assimilation.  It is not unusual for people to hide their lingua franca in fear of being laughed at or being “found out.”  Unfortunately, looks such as curly hair, flat noses, and dark skin, are much more difficult to cover-up.

Language is the bearer of culture.  More than giving labels to a material world, it is a reflection of a population’s psyche.  A single word can have a profound significance among a group of people.  To the curious outsider, that single word can give a no less profound insight into that people’s life.

The struggle for basic civil liberties and the right to life is as old and as long as the epics they sing.  And perhaps one day, just like their epics, their languages and they themselves will be nothing more than mere recordings on discs and papers stored somewhere in an archive or published as part of a heritage series for scholars and the culturally curious to peruse, study, and comment on.  When that time comes, we have not only lost a culture.  We have lost people’s lives as well.

What We Can Do

1.  Support indigenous schools of tradition that propagate the community’s language and traditions.

2.  Support efforts such as those by the Summer Institute of Linguistis (SIL) which publishes educational materials in indigenous languages.

3.  When visiting communities, take the extra effort to learn basic phrases and expressions to make the speakers realize you value their language.

4.  Do not laugh at people speaking their native language.  If they speak in a more widely-spoken language such as Tagalog or Bisaya and they stumble and make mistakes, do not laugh at them.