Where’s My Flight? Or An Extra Day in Vientiane.

Everything had been packed and weighed carefully so as not to exceed my 25k pre-bought luggage allowance.  I had checked-in online for a couple of days ago for my Vientane-KL and KL-Clark flights.  I didn’t bother printing the Boarding Pass anymore as I knew they would print-out a new one at the check-in counter at Wattai International Airport.

Put all my stuff at the  tuk-tuk I had rented-out from in front of Mixay Guesthouse and headed to the airport.  With the minimal traffic on Vientiane’s roads, we were there in less than 30 minutes.  It was the most peaceful and serene airport I had ever seen.  No cars, vans or transport of any kind lining up, no passengers!  It was just me on the curb.  The helpful tuk-tuk driver loaded my luggage on the trolley and I handed him 50,000k— keep the 10,000 change.  In typical Lao fashion, he smiled broadly and said he hoped to see me again.  “Of course, Laos is very nice.  I will come back,” I answered which brought an even bigger smile to his face.

An elderly security guard asked me if I was headed to Bangkok.  “KL,” I said.  He looked at me quizically then led me to the Flight Board.  Hmmmm… I don’t see a 17:15 KL flight.  Strange.  Maybe there’s another airport?  Then I started to get nervous.  I looked at the plane ticket I had printed out in Manila 3 weeks before and which until now had remained folded in my travel case.  The first numerals I saw was “1:30pm”.  I felt like a cold bucket of water harvested from the North Pole had been doused on me.  My eyes scanned left to the Departure notice on my ticket.  “9:45am.”  My mind protested.  “It says 5:15pm on my Blackberry Travel app.”  In a flash, the memory of the Air Asia ITs being sent to my email the few days before my flight and which I had ignored ran through me.  AIR ASIA HAD BEEN RESENDING THE ITs BECAUSE OF A FLIGHT CHANGE!!!!!!

I know I should have read my ticket at least. Oh well.

I look for an Air Asia office and the helpful security guard who by now is amused at my situation, leads me to a directory.  I find the Air Asia office listed and I point to the Lao script.  He opens a door to the corridor leading to some offices and there at the end is the familiar red logo of Air Asia.

No use pleading for a refund as it really is all my fault.  Quick flight check and it’s $205 for a flight to KL tomorrow and $105 for a flight to Clark.  Too much!  I think of taking the bus or train to Bangkok instead.

I head to Lao Central Airlines and there I find a little bit of consolation.  It’s $89 to Bangkok on an 8am flight tomorrow.  I book the flight and pay for it with my credit card.  While the guy transacts, I call Mixay Guesthouse and ask if I can have my room back.  “Available,” the reply comes.

Lao Central Airlines office at the airport. I shall forever be grateful to you.

I look around the airport and except for a couple of falangs it is empty.

Outside, I am met with smiles from a few security guys.  News travel fast.  “No flight to Malaysia,” says a chubby officer.  “Hahahaha! I missed my flight,” I answer back.  Lao style response to an otherwise stressful situation.  To the Lao, there is no use being stressed-out over something.  Life goes on.  It it will even if I still have to book a Bangkok-Manila or to Clark flight which undoubtedly be more expensive. 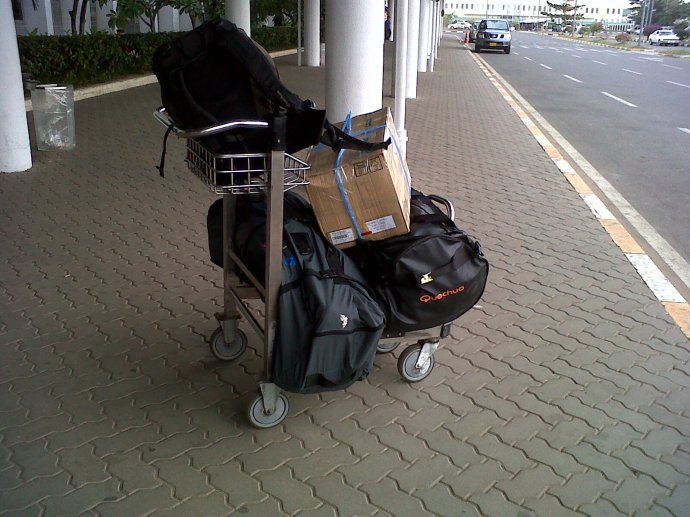 These bags ain’t going anywhere but back to the guesthouse.

“Tuk-tuk,” I ask the smiley security guy.  He points me to the official coupon taxi guy.  I book one and in a few minutes, a spankingly clean sedan shows up at the curbside ready to whisk me back to my guesthouse. 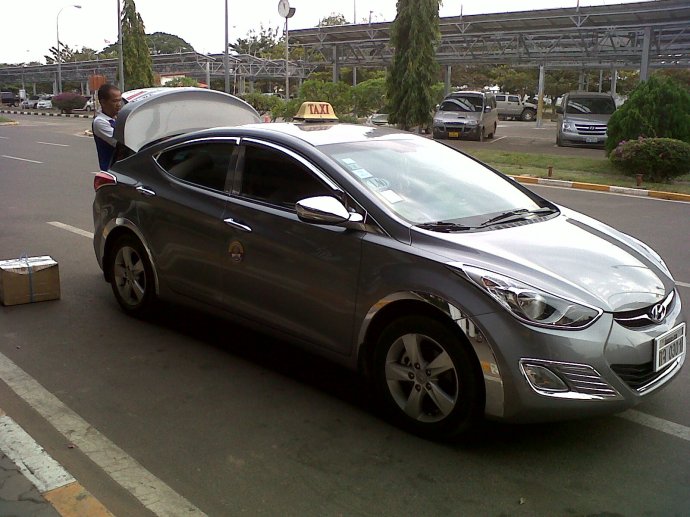 The road is empty and in a few minutes, I am back in familiar territory.  The peacefulness of my surroundings—- the empty airport, relaxed airline staff, smiley security guys, and the comfortable taxi, seemed out of place for my current situation.  But perhaps, Laos had truly gotten to me.  Except for the brief cold shock of realizing I had missed my flight and would have to pay for new ones, I was as relaxed as I could possibly be.  This isn’t the first time it happened.  Years ago, I had misread my flight time for my Bangkok to Manila flight which resulted in a new flight and a couple of extra days more.

So I get my old room (206) back at Mixay and the guy at the counter who had earlier asked me if I were staying another night in Vientiane said if I wanted to take the Bangkok-bound bus instead.  I told him I had already booked my flight but thank you anyway.

At the internet shop where I am now, I just booked my Tigerairways/ Seair flight to Clark.  Cost is about THB 4,600 including 25kg luggage and my choice of seat (window side, over the wing). I check my email from my bank and my available credit in my ATM which I set aside as emergency cash is more than enough to keep me high and dry even if I wanted to spend an extra day in Bangkok, something which I seriously considered.