Laos: The Adventure Begins in the Taxi

This post on my 3-week vacation in Laos from the last week of December to the second week of January this year is almost a month late. Out first was my post on how I missed my flight from Vientiane to KL which was written and posted immediately from the internet cafe across my guesthouse near the riverside at Vientiane having come back from the airport.

I have been home for about a week already and Laos is still in my mind. I had  finally gotten to bringing a journal of sorts to record my daily experiences throughout the trip.  Sitting quietly on a riverside cafe while writing about the day’s events are one of my most memorable experiences.  Indeed, it was in Laos that I truly learned to soak-up atmosphere.  As a Russian-turned-German national that I hiked with in Luang Namtha told me when I complained that I had not done anything yet since arriving in Laos, “But you’re on vacation.  Doing nothing is part of it.”

In Laos, I had learned to turn the art of doing nothing into a true masterpiece. But before all of that, was some bit of stress.

From Manila to Clark

My flight from Clark to Bangkok was still at 6:10pm but I had no choice but to take the 12:00nn Philtranco shuttle at Megamall as the next one would be at3:30p, too late for me.

Traffic was light in the morning so I was secure in taking my time at the house, having a light lunch and sending-out Mary Ann, one of the household help, to get a cab at 10:30, a full half-hour before intended time to leave at 11:00.  Fifteen minutes later and there was no Mary Ann and no cab. At 11 am, I started to panick. I called Buritsky, grabbed my bags, and walked to EDSA. I figured, if I couldn’t get a cab, I can take the

bus.Traffic had built-up and flagging a cab seemed to be hopeless.  Fortunately, one came rattling along. I flung the doors open but when the driver heard my destination, he refused.  For the first-time ever, I begged.  I begged him to take me to Megamall and be there before  12:00 so I can catch the shuttle.  I begged him to take me for Php 200.  He upped it to Php 250.  I sealed the deal.

Horn honking, lights on hazard, and my driver cursing every private vehicle in front of me, we were in a scene straight out from some action movie with me  in the spotlight. It was horribly traffic and an anxiety attack kept threatening to break-out.   But my driver was relentless. He promised to deliver me to Megamall 5 min

There was a bit of a crowd at waiting at the wooden benches at the Philtranco terminal.  The shuttle was late, arriving  close to 12:30 pm already.  It was the turn of those who had 4pm flights to get anxious.  I skipped the reserved seat I had booked in advanced and headed to the back of the row for some peace and quiet away from the nagging kid beside me.

North-bound traffic was quite light and we arrived at Clark airport around 2:30 pm. There was nothing to do but wait for the counters to open at 4pm.  It was the longest wait ever and a crappy one at that.  There were lots of departing and arriving passengers.   I meant to while away my time with some snacks at the  food court outside but it was crowded and the tables were dirty.  I spent the rest of the afternoon staring at the check-in counters.

4:00pm and I’m finally able to check-in leaving behind a group of chatty matrons on the next line who were kinda uppity that their line hadn’t started to move yet.

At immigrations, I stood in line to be accosted (yup, that’s the right term for this kinda of officer) by a loud-mouthed immigration officer who had just sent a guy for a secondary interview at the office with a loud, “I’m sorry!” said in a manner befitting a cartoon character more than an officer of the Republic .  To the lady ahead of me, he was asking the usual questions about work and how many days of travel, etc but in a totally repulsive manner that spoke of power-tripping.   She and the guy on the other line, who it seemed was her boyfriend, were sent for secondary interview.  When my turn came, I simply handed him my documents.  Seeing my occupation, he suddenly turned all respectful.  I answered his questions stoically.  He stamped my passport and let me go.

Compared to immigration officers at departure points in other countries, this guy was behaving in such a shameful manner.

Due to late turn-around of aircraft, we departed close to 8pm, an almost 2 hour delay. I didn’t mind as that would mean less time spent wandering around Suvarnabhumi airport, my sleeping quarters for that evening.   The flight was smooth and pleasant and I managed a few winks.

My bed for the night

Suvarnabhumi is probably one of the best airports to sleep-in.  It’s huge so there’s enough floor space for everyone.   After a quick dinner at a Thai restaurant, I headed to chosen spot—- an entire row of empty steel seats  at the third floor concourse near the toilets. I  clamped my bag with my bike lock and slept.  It was really cold and the thin sheet I had with me didn’t help much. I kept waking-up every hour.

I finally stood-up around 5 am, drank my cereal, and headed to Gate 3 for the 6 am free shuttle to Don Meuang. There weren’t  too many passengers and the traffic was light. The trip only took 50 minutes.

After checking-in for my Air Asia flight, I had a quick breakfast at KFC. Their breakfast set was different from what we have back home— there was breakfast twister and biscuits which I absolutely loved! Across it was a Krispy Kreme stall but I resisted the temptation of trying it if it were any different from the one at home.

The flight departed on time and we landed at Chang Rai where I took a cab from the airport to the old bus station. It was easy to spot the right bus as there were big signboards and a helpful bus tout. One was leaving in a few minutes but I decided to take the 12nn one so I could grab a better seat and have a light lunch. The lady who pointed-out the bust to me  put my  big bag was at the rear.   I put my blanket and fleece jacket on a window seat to reserve my spot  beofre heading  to one of the stalls selling sausages.  Deliciously meaty.  It would be my only taste of Isan cuisine. 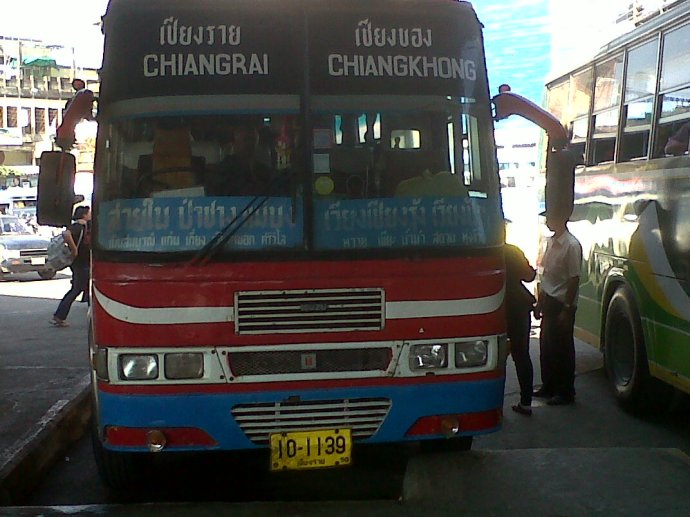 The bus to Chang Khong

The bus departed on time and it as quite full by the time I took my seat.  It was an ordinary local bus — no ai-rconditioning and with leg room good enough for people 5 feet and below.

The trip to Chang Kong was on a good sealed road that passed through rice fields and villages.  It was an unremarkable trip and I was glad to arrive at the small terminal after 2 hours where I took a tuk tuk for the 5-minute ride to the border and the  boat dock. I had my passport stamped-out of Thailand, paid for the cross-river boat that took me and a few other passengers across the Mekong to Huay Xai and I was in Laos, albeit not officially as I yet had to pass through immigrations.

That’s Chang Khong on the other side of the Mekong 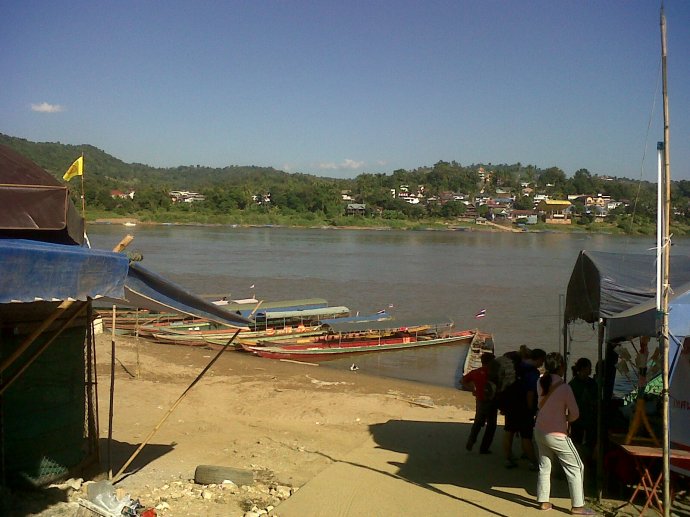 That’s Huay Xai on the other side.

At the small immigrations office, the officer looked quizzically at my passport turning the pages  looking for my visa.  I told him, “Philippines. No visa.”  He turned to an officer beside him and I head him say, “Philippines.”  They spoke a few seconds in Lao then he stamped my passport and handed it back to me together with my departure card.  “10 baht,” he said.  Without a flinch, I gave him the money which he put inside his drawer.  Whatever it was for, I didn’t bother to ask.  It was a small price to pay to get past a system that was known to charge fees for anything, especially from white-skinned travelers.

Across it was a small money changer where I exchanged some dollars to kip.  At the top of the road, on the main street, I took the room at the first guesthouse I came to, Phonetip, which I assumed to be a good one as it came recommended at the Thorn Tree Forum.  50,000 kip gave me decently-sized room with television, a comfortable bed, a bottle of water, an ensuite bathroom, and a view of the street below from a common terrace.

Corridor leading to the terrace at Phonetip GH