I arrived in Houay Xai on the afternoon of Saturday, Dec 22.  The trip was exhausting as I didn’t get much sleep at Suvarnabhumi airport in Bangkok and the open window of the local bus from Chang Rai to Chang Khong meant that wind and a fair amount of road dust was flying on my face for about 2 hours.

After checking-in at Phonetip Guesthouse I went to one of the travel agents along the side road that ran from the boat dock to the main road and booked at mini van ticket to Luang Namtha.  I have read quite a few horror stories about overcrowded and sweaty minivans so I thought of taking the local bus.  No air-conditioning but wider leg room.  The guy at the agency seemed a little surprise at this and he urged me take the mini van instead saying it would be more comfortable and that all the tourists take it.  He showed me pictures of a clean air-conditioning vehicle.  Somehow, I was convinced and paid him 90,000k.  He wrote me a ticket and told me to be at the travel agency by 9am the next day.

I bought a Unitel SIM card at a large store just across the guesthouse and beside the stairs going to the wat for 25,000 which was horribly overpriced I was to learn later on when I arrived at Luang Prabang and saw the same SIM card being sold for only 10,000.  Perhaps I was still a bit disoriented as he also sold me a 50,000 load which was way too much for my needs.  Since even international texting is dirt cheap, the equivalent of only Php 2.00/text, I used my load a lot.

The main road was lined with guesthouses, travel agencies, and some restaurants. I never did walk it from end to end as I was quite afraid of dogs and any attempt to at least walk from the center where my guesthouse was to about 100 meters from either end was soon quashed as there seems to be too many dogs walking the street for my comfort.  I was to also discover later on that the dogs in Laos (at least in the places I visited) were very docile.

After spending so much time seated on airplanes and buses, my legs needed to move.  I headed to the wat at the top of the naga stairs just across the access road to the boat dock.  There was a cute and colorful temple and a few other structures in the large complex. 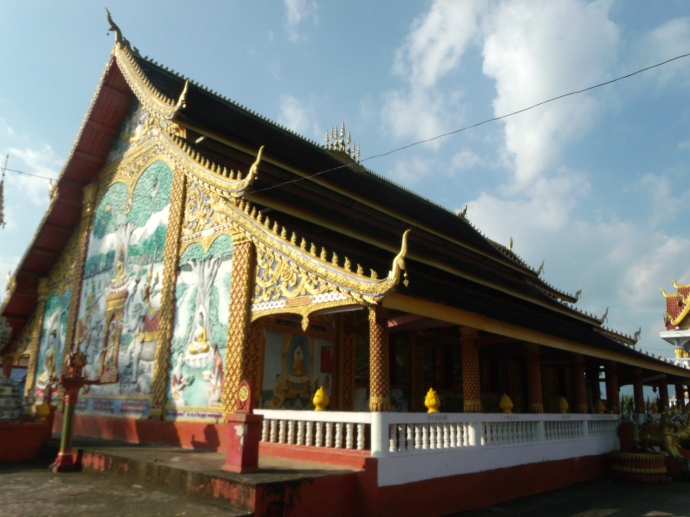 One monk asked me where I am and when he told me I was from the Philippines, he immediately responded, “Manny Pacquiao!”  He knew the man and his victories and his recent defeat.  As I made my way to Laos in the entire course of the trip, being Filipino would come to mean to being associated with Manny Pacquiao. Not really bad as one Laos told me, “Laos supports Manny in his fights because he is Asian.”

A European guy in his early 30s or probably late 20s bade farewell to the monk I was talking with.  He had just spend the night at the temple and was leaving.  Maybe, I should try that one time.  Sleep at a temple.  I had read in the internet how some tourists  spend a few nights in temples when accommodations are full.

Nourishment came in the form of sausages and fried rice ordered from an unnamed restaurant along the road.  It looked more local than most of the restaurants lining the strip —- wooden tables covered with vinyl table cloth, radio blaring Lao music, and a family-run enterprise.  Out front was a guy grilling some chicken in bamboo skewers and sausages.

I took a table and waited for my plate of rice and sausages.  The food arrived in about ten minutes and it was delicious! The sausage was a little spicy and very meaty and succulent.

I liked it so much, I ordered another one.  If Laos would have sausages that delicious, I sure would enjoy my trip.

The next morning, I woke-up to the sound of bells.  I looked-out the balcony and a procession of monks came down from the naga stairs.  More than half formed a line in front of the mobile phone shop and the rest on the other side.  They chanted something  after which they started walking as women knelt by the side of the road handing them food.  It was only 6:30am and still very early so there was not much traffic on the road.

I arrived promptly at 9 at the agency with all my stuff in tow but was told to come back at 9:30.  I bought a sandwich with some ham and egg for 15,000k.  “One more,” the vendors said when I passed by after buying some water from the next store.  They sounded like the persistent H’mong vendors in Sapa who bugg you with “One more! One more!”

I had just finished dusting-off the crumbs of the sandwich I had eaten when the guy at the agency pointed to another guy and told us to follow him to the mini van to Luang Namtha.

We made our way along the “main” street, amidst a few throngs of people heading to tuk-tuks and vans parked along the road.  Our grey mini-van was parked on a small vacant lot a few blocks away.  There were already people seated and I took the last vacancy at the back beside two locals while the couple took the front seats beside an Austrian lady.  The three of them spoke in German so I assumed the couple were either German or from a  German-speaking country.

The ride was very comfortable as the roads were sealed and there was hardly any traffic.  The van was really nice too as it was clean, had strong air-conditioning and there were only 11 of us including the driver.  Just the right capacity. I managed to get some sleep in spite of the nice views of rolling hills and mountain ranges.  The Austrian got off somewhere in Vieng Phukha.  Perhaps, she was going hiking there.  She showed a piece of paper with Lao script to the driver and he called someone.

The rest of the passengers got off along the route and by the time we reached Luang Namtha it was just me the couple.  They shared their can of Danish butter cookies with me but I declined as I wasn’t really hungry.

We arrived in the center of Luang Namtha, just across the Night Market at around 1 pm, about 3 hours since leaving Hoauy Xai. I had gotten impatient and hungry and it was just about time that we arrived.