Laos: The Long Walk to the Villages

We had decided last night to go for the longer route that would take us to more villages in Muang Sing. After a breakfast of bread, omelet, and rice noodles, we set out around 8:30.

The first few villages we headed to were all Akha.  The houses were fairly large and made of wood.  Harvesting was over so the downtime was spent doing a lot of building or repairs and it seemed the Akha had a lot of major renovations.  The first we village we came to had men cutting large beams of wood to build a house.

Exiting the village, I encountered my first Akha gate. 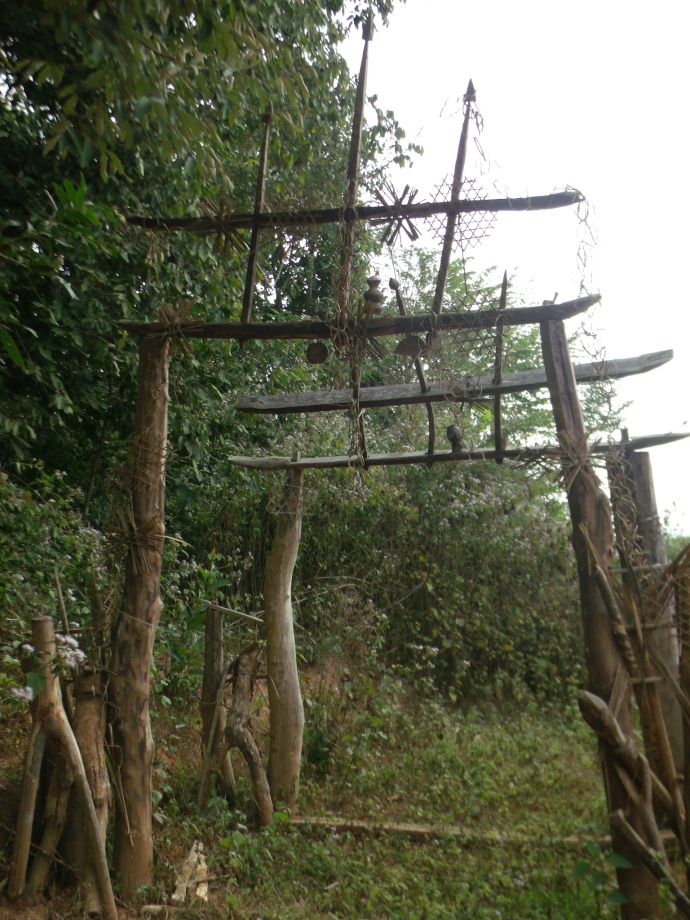 It’s a gate; but only for the Akha. Visitors should never even go through this gate.

Past the village, we took the road that circuited by Adima Guest House which looked quite empty of people then crossed the main road to the fields beyond it. The walk was easy as it was mostly on flat land.  We passed through plantations of bananas, rubber, and rice.  Most interesting were the banana plantations which had large bundles of bananas wrapped in protective layers of plastic.  These high-quality bananas were all destined for the market and they were really taken cared-of.

The view was very scenic as the valley was hemmed by green hills and leafy trees, mostly rubber, kept the sun out, not that it was searing hot.  Occasionally, we would meet other villages heading to the next village or to the forest to get some food.  They were all very friendly and often smiled and returned greetings of  “Sabaidee!”

We arrived at one Akha village to the echoing sound of a gong being struck.  A vendor from nearby Vietnam had arrived on a motobike.  The young man was peddling all aluminum cooking pots and pans, thin-rimmed bossed gongs the size of dinner plates, and a pair of cymbals.  One villager was trying out the sound of one of the gongs with a mallet.

We didn’t really stop on the villages as we didn’t want to intrude into their day.  At one Akha village, groups of men were erecting bamboo poles on a large field outside the village.  They were building the structures where the dancing would be held on January 4, their New Year.  A small shed-like structured was already in place. 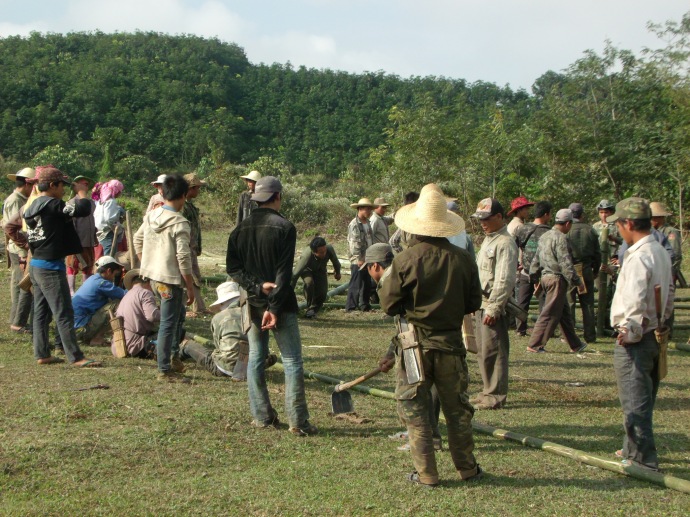 We stopped at another Akha village for lunch.  We were well-received by our hosts, a husband and wife, who were all very friendly.  The wife had just finished her bath as was hanging her clothes and was  only in a sarong.  She greeted us with her toothy smile stained with betel nut juice and covered herself by lifting the top part of the sarong.

One of their children had just given birth a week ago and the baby was sleeping in a small cradle.  We were given bananas, oranges (from China), and some tea as we waited for our food to be prepared.

The house was built on wooden stilts and had a large veranda were socials and  meals took place.    A wash area for the utensils was just outside the kitchen. The space underneath the house was where some bigger household stuff such as planting tools were kept. 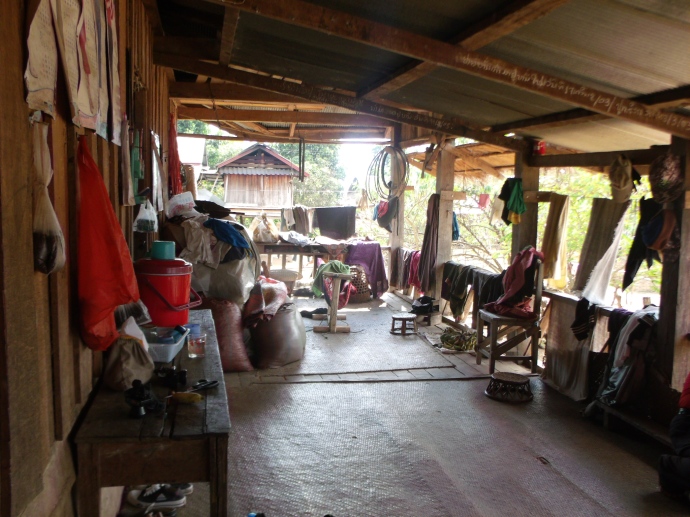 Everyone slept in a large bedroom at the corner of the house while another room served as a kitchen.

After our lunch of  vegetables, chicken, and sticky and steamed rice, our male host offered us a shot of lao-lao.  Fortunately, it was not as strong as the one I had at the lao-lao making village in Luang Namtha otherwise I would have puked as I had to take another shot so as not to offend our host.

We rested a bit more then got-up to thank you hosts. I offered 20,000k but our host pushed my hand back.  “For more lao-lao,” I insisted.  The wifey was at her loom underneath the house, weaving cotton.

The Tai Lue village looked just like a typical Lao village with its wooden houses which was not surprising as the Tail Lue and the Lao were related.  Compared to the others, the village looked more progressive.

Back on the dirt road, we passed by a small shrine in the forest which was sacred ground to the people living in the area.  Som said that every year, everyone, regardless of ethnicity, would gather in the shrine to celebrate their unity.  We were not allowed to go past the small gate to the shrine.

Our final stop was a Lolo village where our vehicle would pick-us up and bring us to Muang Sing town.  The village seemed typical of the others but there were concrete houses with Chinese calligraphy on the facade and the wooden one were much smaller and were set on the ground compared to the large stilted houses of the Akha.

Our SUV arrived and it felt good to be on comfortable seats and air-conditioning.  We were a bit grimy and smelled like the sun.  It wasn’t a very long driver and we soon pulled into the small streets of Muang Sing town.  We made a detour to the rows of Chinese stalls across the bus station for Oleg to buy a headlamp.  There were all sorts of stuff being sold—- fake mobile phones, appliances, flashlights, and many more.

Our vehicle dropped us off at Phou Lou travel and guesthouse where we decided to also spend the night.  It was a bit more expensive than our lodging at Luang Namtha but it had a nice garden around which the cottages were placed. Oleg talked me into it as he needed his yoga fix, something he was unable to do in Luang Namtha.

We got one of the wooden cottages with its own little porch.  Our room had two large twin single beds and its own bathroom.  Very clean and very nice.  It did feek wonderful to be in such peaceful and comfortable surroundings after walking all day.

I just dropped my backpack at the room and went out to go with Som to his village on a tuk-tuk.  There was one guy there who had and could play a khaen.

Bame Dome Mai village is just a few kilometers from the town over unpaved roads.  Som’s house was relatively large.  It was clearly that of a man who was quite successful, by village standards.  Compared to those of his neighbor’s wooden houses, Som’s was of concrete, even the floor.  A large curtain was strung at one end of the house where personal belongings were stored.

His father was watching a home tv shopping channel when we arrived.  The house of the khaen player was just behind.  Neighbors gathered as he started playing. Unfortunately, he had a cold so his runny nose made playing very difficult.  He was game enough, though, to answer questions about the instrument and Som filled in the missing pieces.  He bought the khaen from an instrument maker  from Sam Neau who visits the village occasionally.  According to Som, he was famous among the H’mong for the quality of his khaen.  Such is the value of the khaen that its price is determined by the length of the instruments from tip-to-tip measured by hand width.  Each span of the hand cost 100,000k!  I measured 700,000k on his instrument. It was indeed a fine instrument as the bamboo tubes were very clean and smooth.  The sound was beautiful and clear.

I went around the small village for a while but as it was late in the afternoon and I was eager to get out of my grimy clothes, I bade Som goodbye.