Day 1 of the tour.  Woke-up to the sight of the Mediterranean Sea just outside my bedroom window. It was just so weepingly beautiful with its gently rolling waves lapping the golden shores lined with a few date palm trees. Unfortunately, we only had an overnight stay at The Seasons no chance to walk along the shore.

Where’s the Meat?
We were ready to come knocking down the closed door to the dining area for the breakfast buffet by 6.30 only to discover that it was still opening at 7. Kinda late I think.  I was really hungry as the only food we had was the dehydrated omellette and rolls served at the airplane the previous night just before we landed.

Door opens and Yoko and I snag a table near the buffet. I begin loading my plate with bread and bread and…. bread.. and salads.. and salads. I am in search of protein and all I find is scrambled eggs and hard-boiled eggs?  Where’s the bacon,  sausages,  ham,  corned beef?

I had forgotten that Jews eat kosher— certain foods are prohibited and that includes pork.  I also learn later as  explained by Ronan, our tour guide,  that dairy products are never mixed or  eaten with meat due to a biblical prohibition.

The breads and the salads and cheese are very good though.  But I still miss my meat.

Church of the Stella Maris
We headed to Haifa on a big tour bus just to ourselves with Saher as our driver and Ronan, pour guide. Both had been to the Philippines before.

The views as we ascended the convoluted roads to Haifa were expansive and green. Agricultural lands were everywhere. There were no mega structures so the sights were unobstructed.

The church is built on top of the cave where Elijah lived. It was small and simply adorned. Due to another tour group’s late arrival and overstay, we decided to just have our mass at the next church rather than waste time waiting.

Bahai Gardens
As we headed to the winding roads of Mt. Carmel, it was obvious we were to share the tourist trail with a crowd judging by the sheer number of buses. It was still a good number though and nothing like the crowds in more touristy spots such as Bangkok.

At the top of the road from which we could see the ports and the city below,  we ascended to a portion of the neatly manicured lawns of the Bahia temple.  Looking more like English garden rather than religious sight to the Bahia faith,  the only indication of sacredness was the gleaming dome of the temple below.

Mt. Carmel
There is a story in the Old Testament that says Elijah won in a contest that pied him against 450 priests of Baal. A church now stands on the sight atop Mt. Carmel. As we entered,  a Caucasian guide was reading the passage from the Bible aloud to his equally Caucasian group.  Found it a little over the topwith all his dramatic flair considering he was sharing the grounds with other groups.

The same loud guy charging with his obnoxious voice at the rooftop just as Ronan gathered us.  In a clear voice, Ronan announced that he was gathering is so as not to interrupt another group by speaking in a loud voice though he could do it if he liked (he purposely raised his voice at this point and glanced at the other guide). Hehehe. That quited obnoxious guide a bit.

The sprawling valley below was the sight of so many biblical battles. As Ronan talked about them,  I couldn’t help look in awe at so much ancient history that lay before me. I had been amazed by the stories in the Old Testament when I was a child especially since I had comic book versions and there I was standing on top of Elijah’s Carmel and gazing on the ancient battlefields where propheys such as Deborah led the Children of Israel to triumph against its enemies.

We had our private mass at the little chapel behind the main church.

Falafel and Salad Buffet
We arrived at a family-run restaurant for lunch courtesy of MMD (that’s my boss) since it was her birthday.  The $10 meal consisted of a choice of pita sandwich (falagel or chicken fillet), a salad buffet, and a drink.

This was the Mediterranean so the salad buffet were all roasted or raw vegetables with tahini as dressing.  The falafel was crunchy and delicious and I especially liked it with the roasted peppers, aubergines,  onions, and cauliflower. The others in the group didn’t seem too happy with their falafel though as it was foreign to them. 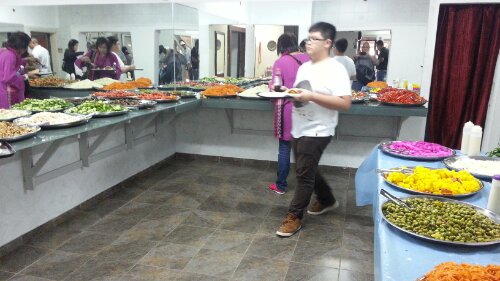 Wanting to escape the hordes who undoubtedly would be heading to Mt. Tabor, our next stop,  we hoppied on our bus and headed to the mountain where Jesus was seen by the apostles Peter, Paul, and James talking to Elijah and Moses.

Mt. of the Transfiguration
Looking like an overturned bowl on the flat plains, Mt. Tabor offered us dazzling views. To now,  I still could not get over how expansive Israel was. It truly was not hard to imagine how all those biblical events could have taken place.

Mini buses took us up the steep zigzaging roads to the top on which stood the beautiful Church of the Transfiguration built more than 60 years ago from the design of Antonio Belucci.

Alighting from the mini bus, we were accosted with the sight of young men in combat fatigues on military training.  Some looked like they were in their late teens.

The church grounds were spacious and had some much nice photos opps. We could see the Golan Heights from where we were.  Ronan pointed out the ruins of  the first church built dieting the time of St. Helena and which was  later destroyed by the armies of Salahuddin. The second one was built on top of the other by the Crusaders.

The current church had a beautiful main altar dedicated to Jesus. By the entrance of the church were two small identical chapels. On the left was the one of Moses and to the right was of Elijah.

We trooped back to the shuttles as more people were arriving and we didn’t b want to wait in line as Ronan said it could be as much as an hour.

Interestingly,  Tabor is in a Muslim area and the people running the souvenir shops and  refreshment stands at the terminal plus the  shuttles were all Muslims.

Back at the valley, we headed to the Sea of Gallilee where we would stay the night. Like all the drives we had that day,  the views are beautiful.  On one side was the fertile Jordan Valley and on the other,  the vast lake.