From Mandalay to Kalaw and a Not-so-Golden Lily

As promised, someone came along to pick me up and another passenger, a German guy, to take us to the bus station. The German was also heading to Kalaw which meant I wouldn’t be alone arriving at the bus stop at the cold and ungodly hour of 2am. I had asked the receptionist  at A.D1 to call the Golden Lily and book me for early check-in.

The pick-up dropped us off right in front of a darkened bus. There was no English sign indicating the bus’s destinatipoon nor the bus company’s name, Golden Moon Express. A young man did assure as though that it was our bus after showing him my ticket. They turned on the interior lights and we promptly boarded, taking our assigned seats; me at window seat 16 and German right behind me at window seat 20. The bus was clean and tidy.

Close to 7pm, the rest of the passengers arrived and we promptly left. There were only about 20 of us and me and the German had no seatmates!!! We were also given a bottle of water each. Clue: a seat pocket with no bottle of water means an empty seat.

The ride was surprisingly  comfortable. There was ample leg room and the seat reclined.  A/C was not too cold and the tv volume not too loud.

At 9pm, we made a stop for the driver and his conductor to have dinner. We all had to leave the bus and wait  outside for about 20 minutes. 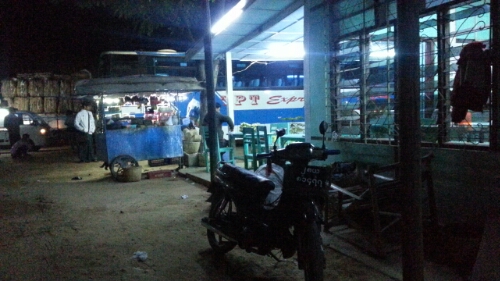 Back to the bus and to sleeping. Hours later, I woke-up as I could feel the bus winding its way up a narrow twisted road. Ha, the curves of the Halsema Highway in Ifugao are no match. This one was really twisty. Thanks to the dramamine I took  earlier, no chance of dizziness.

At about 12:30am, the conductor gently tapped me awake. We had arrived! That’s only 5 hours and a half of travel instead of 7-8. Either the roads had improved, there was a shorter route, or the bus was speeding.

Freezingly cold air slapped our faces as we stepped-off the bus. Only me and the German plus two ladies stepped on to the dark road and into the waiting greeting of a motorbike driver, “You have hotel?” “Golden Lily,” I answered. “Go 5 blocks then left.” As the 2 ladies dissapeared into the night, German headed to Pineland Inn to inquire about a room. I headed into the dark. The sounds of dogs barking in the distance made me turn back and into the waiting motorbike of the driver who gave me the directions earlier. Thank God for motorbike drivers when you need them. He dropped me off at the Golden Lily where I was shown my USD 7 room. 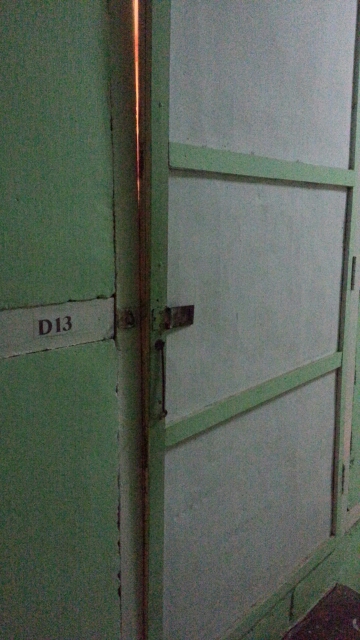 And it opens to this. 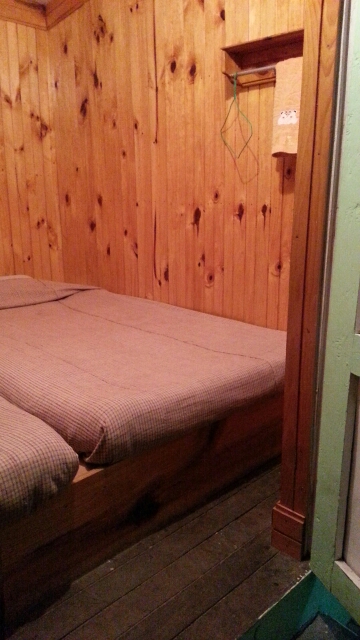 It was  really more of a box with  a platform that had two cushions. As soon as you opened  the door, that was it. Absolutely  no floor space whatsoever. Might as well have opened the door and jump right in.

I’m a cheapo when it cones to accomodations but this was just too much. By now, I had fully awakened to the horror of the room I had booked for the next 5 nights. I asked for another room but was told that everything was full. He showed  me the USD 14 room that was spacious  and had a private shower. He said I could stay for the night for only USD 10. He said I would be able to transfer to a better room in the morning when people check-out. It was past 1am and I figured it was just a few hours before morning so might as well wait. It was freezing cold and I needed to sleep already. So back to the box.

Woke-up at around 7am, met German guy at breakfast who turns out got himself a room at the Golden Lily as no one at Pineland was opening. Told the Indian lady at the reception about my predicament and she kindly showed me a better room. All is well.

Update: Golden Lily is only a must if you have a tight budget and are only staying a few nights. The USD 14 rooms look quite good, though. The USD 7 are absolutely crappy. There are only 2 shower/toilet stalls and water pressure is not very good.