A Square and a Garden

I woke up at around 4 am (about 6:15 am back home, my usual wake-up time) to freezing temperatures.  Snuggled into the soft comforter (plus points to Avalon House for the comfortable bed and pillows) and fell back to sleep.  It was still dark when I woke again past 6am.  Did a few wall push-ups in an attempt to keep me warm and fit (hahaha!).  Breakfast was just a packet of Ultra Green Coffee brought from back home and which I managed to dissolve in a glass of air-cooled water and some bananas I bought at a fruit stall last night.  I didn’t expect Kathmandu to be freezing cold.  I just thought it would just be as cold as Sagada when I was there last November.

Bundled-up into my jacket and headed out only to realize half way down the stretch of Thamel Marg that I had left the walking tour map printed from my pdf copy of Lonely Planet at my hotel room.  All I remembered was to head straight from Thamel Chowk (the intersection) to Netashewar Temple, which was the starting point of the tour that would end at Hanuman Dhoka Square.

At the end of Thamel Marg, I came upon the small temple dedicated to Shiva. 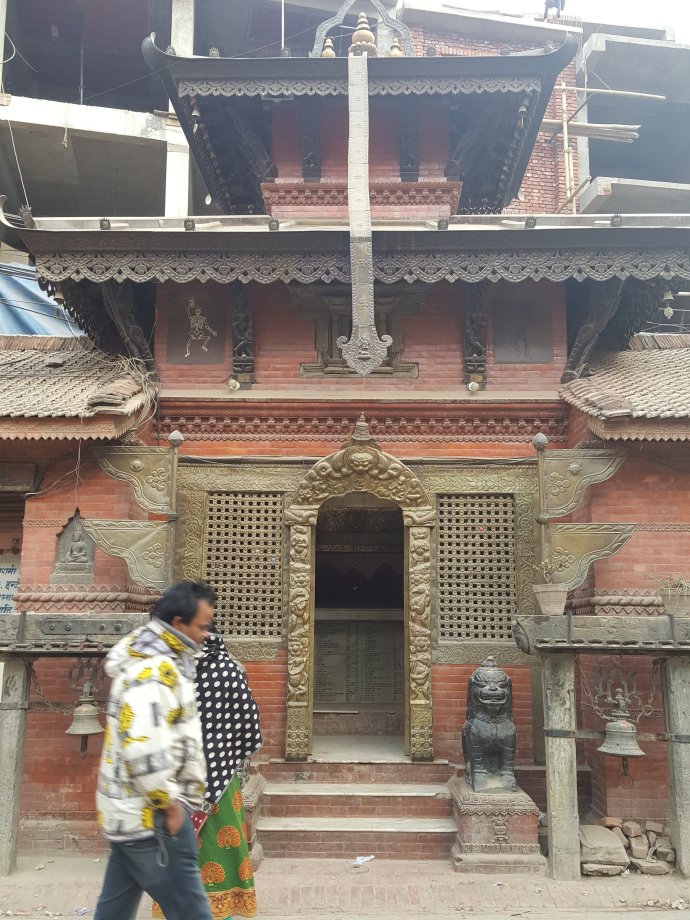 Across it was a white stupa and a large board with a map to the square.  While I figured out if the street leading to the square was the one on the right or left, a Caucasian guy came along, looked at the map, and took the small street on the right.  I followed him.

A few hundred meters down past rows and rows of shops, I spied the square.  Ducked into this small temple first that was being fixed following damages from the 2015 earthquake.

Saw some really nice features in the old buildings in front of the square. 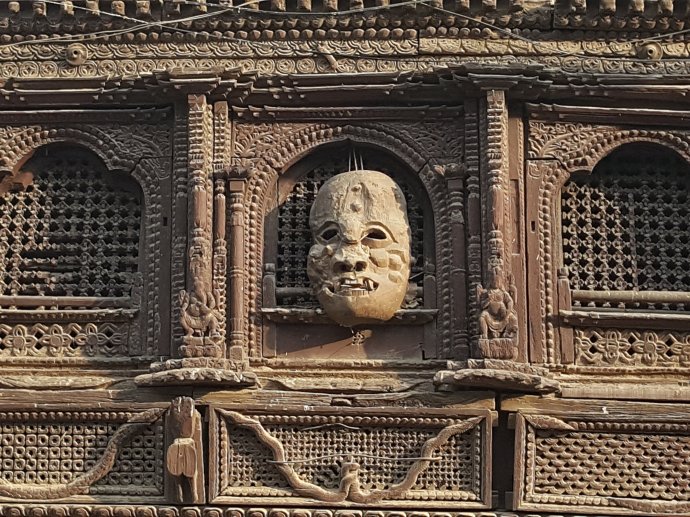 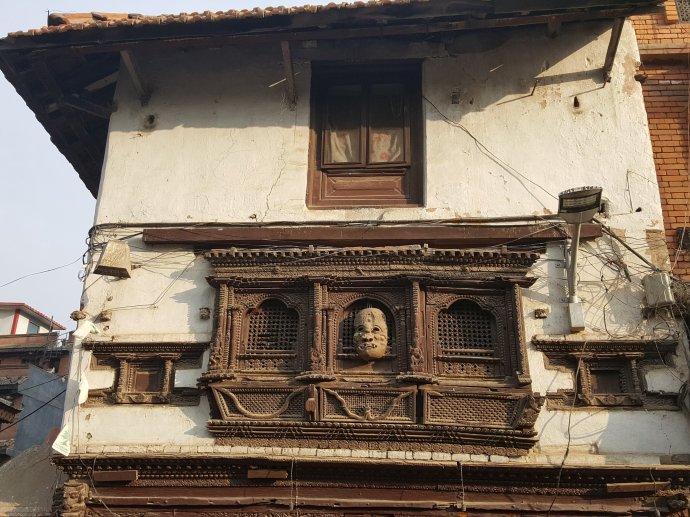 Paid the steep Rp1,000 fee at the ticket booth and was immediately accosted by a middle-aged man named Krishna who offered his guiding services for Rp2,000 but which I managed to bargain to Rp1,500.  I didn’t really need a tour guide but figured I might as well help a local.  Plus it will be good karma someday should I decide to become a tour guide (yup!  Always wanted to be one).  He was very helpful anyhow, pointing out to me that I could get a visitor’s pass at the office that would allow me multiple entries to the square during the entire duration of my visa.  Cool!

The Hanoman Dhoka Durbar Square follows the plan of a durbar square in Nepal which is an open complex of structures such as temples and shops which is the heart of any Nepali town. 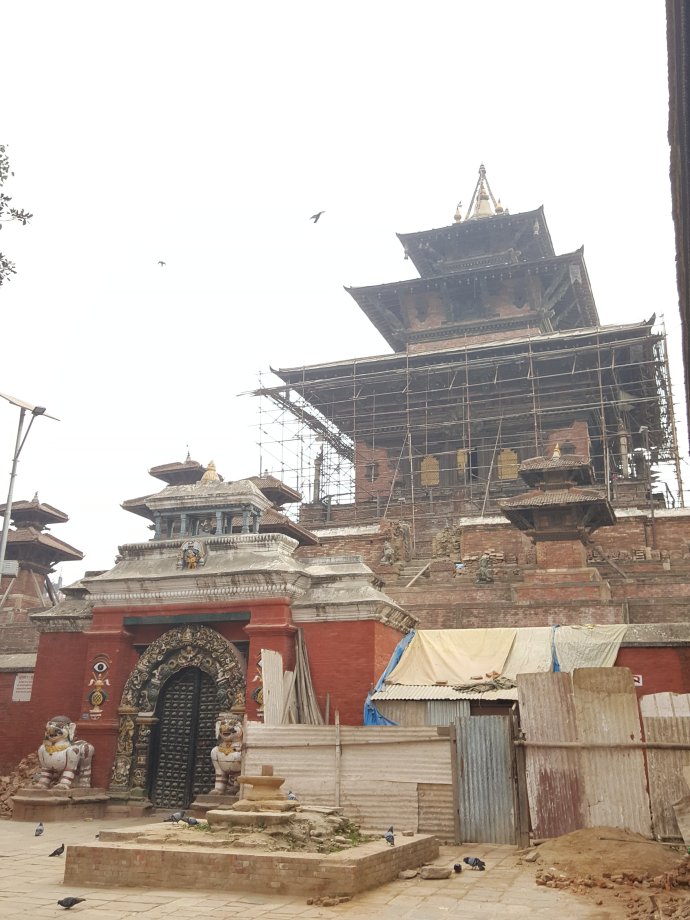 Unfortunately, many of the structures crumbled during the 2015 earthquake while others remained standing supported by wooden posts. 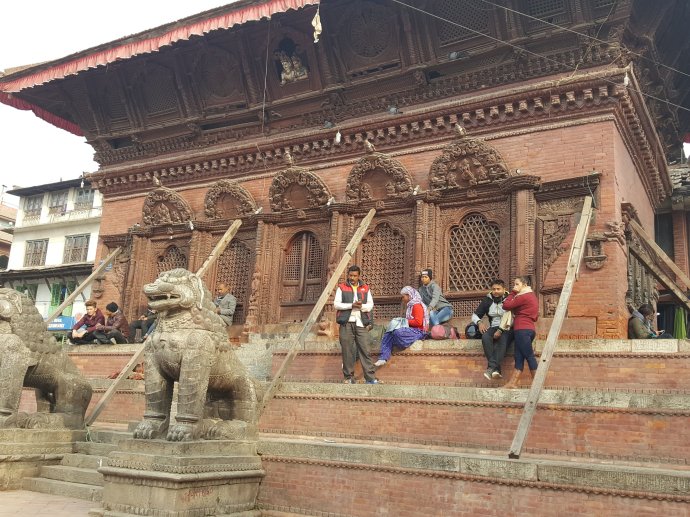 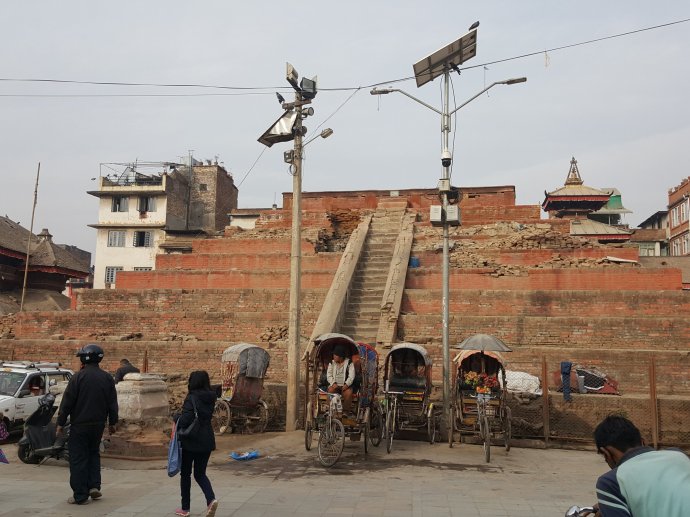 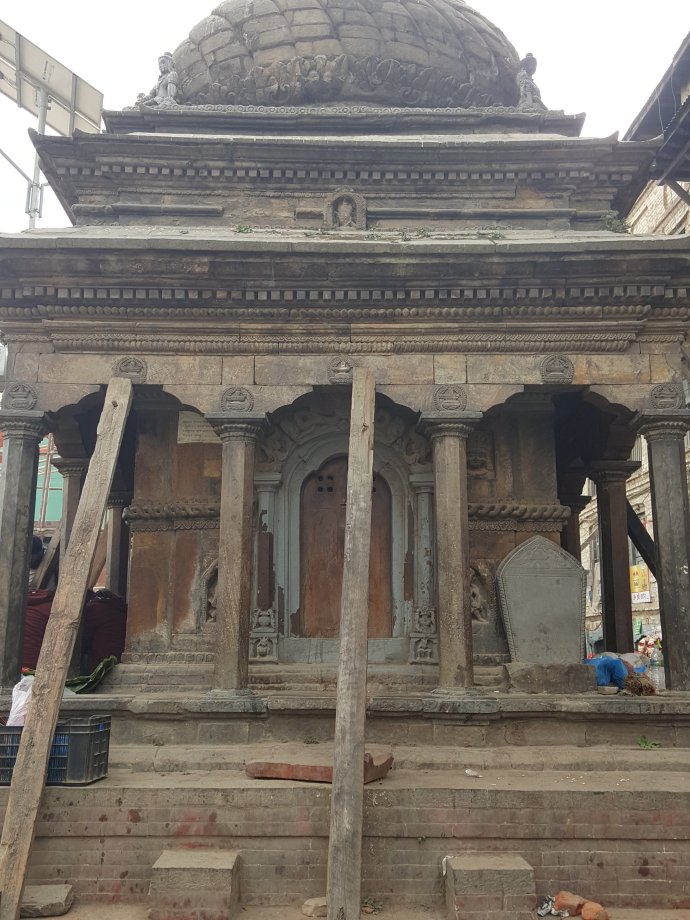 The Royal Palace was one of those which collapsed.  Only the walls remained. 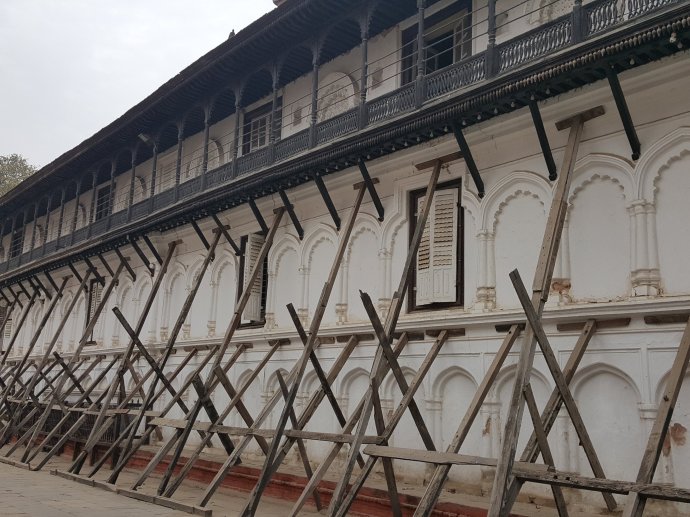 One of the more interesting temples was this one that had carvings from the kama sutra.

One of the better conditioned structures is the house of the kumari, the living goddess who is currently a 4-year old girl that was just selected 2 months ago, replacing the previous one who had reached adolescence. 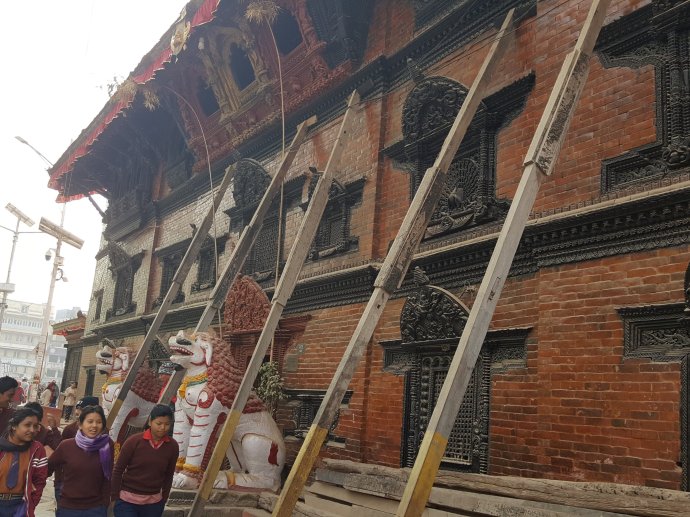 We ducked under the low entrance and emerged into a quiet courtyard.

This is the window where she sometimes appears.

One of the things I learned from Krishna is one can tell which diety is a temple dedicated to by looking at the animal statue facing it.  If it is a garuda (half man, half bird), it is Vishnu’s. 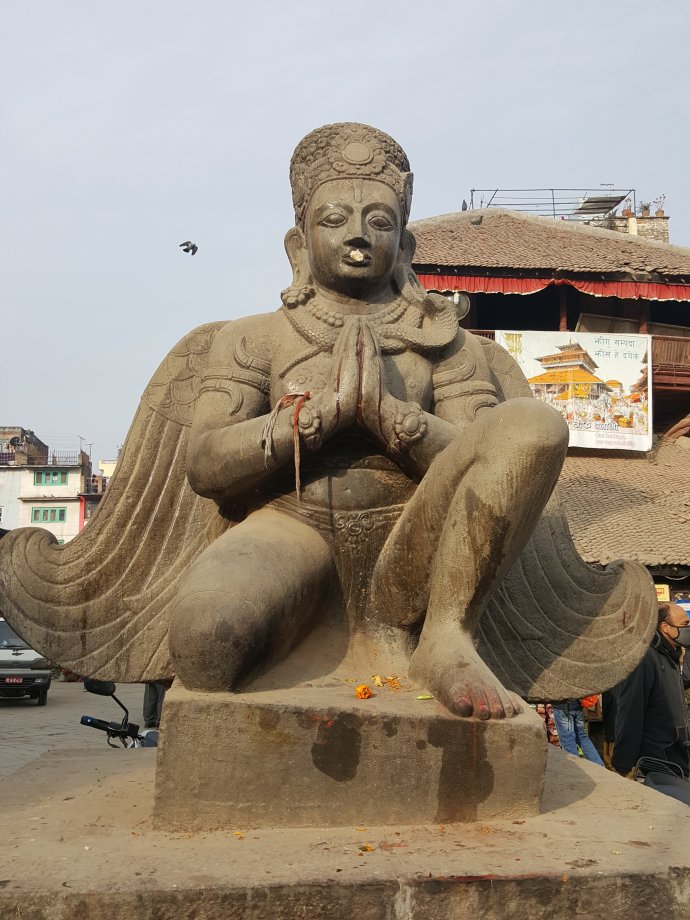 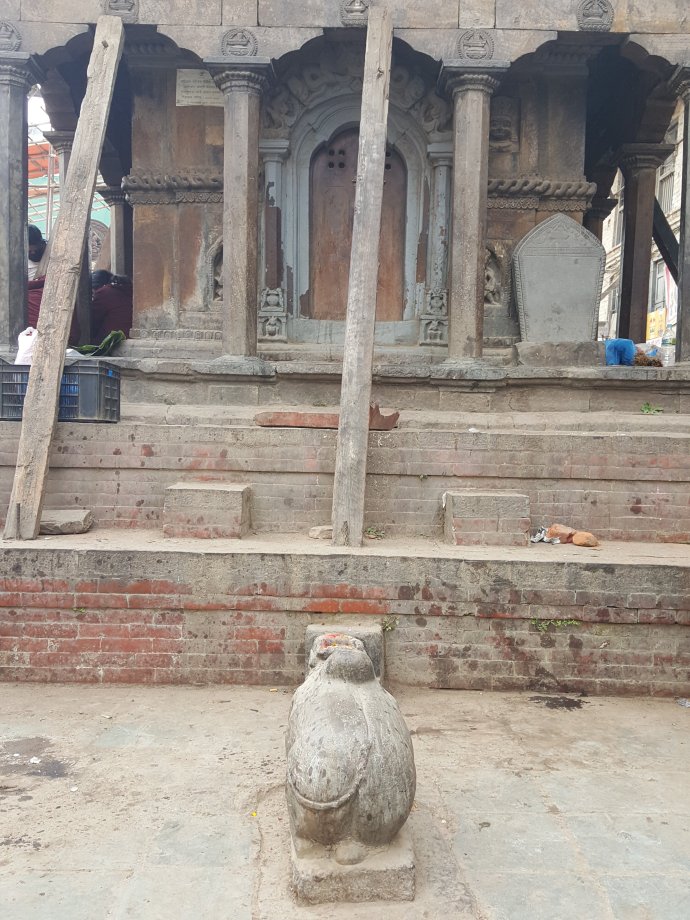 Walking along the square is like being in a living museum where people continue to pray at the temples, sell stuff for offerings, and go about their daily lives. 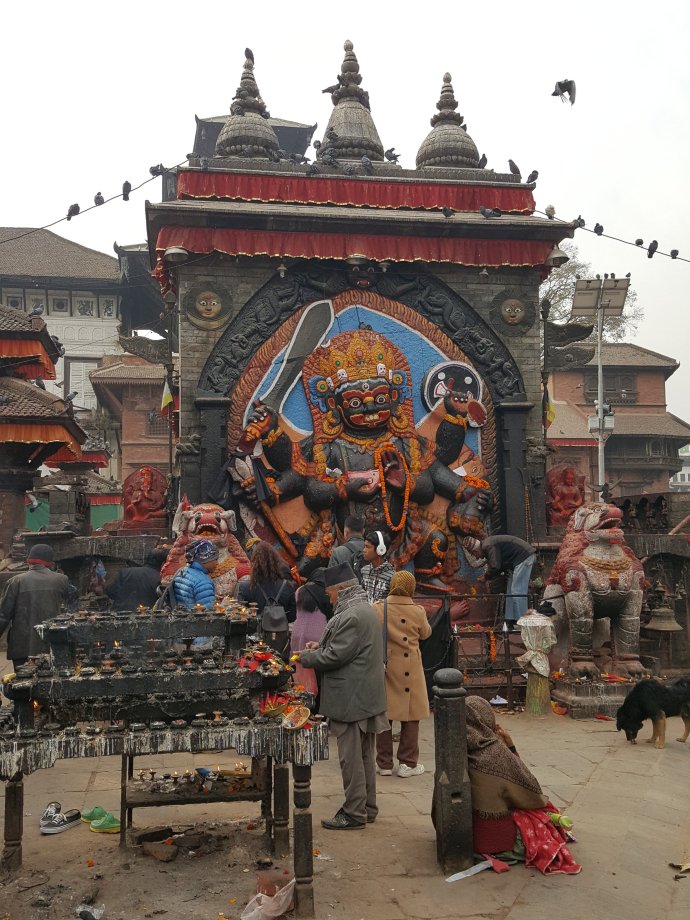 These plates made from plants are used for offerings to the deities.

After my tour with Krishna had ended, I just went roaming around the square. 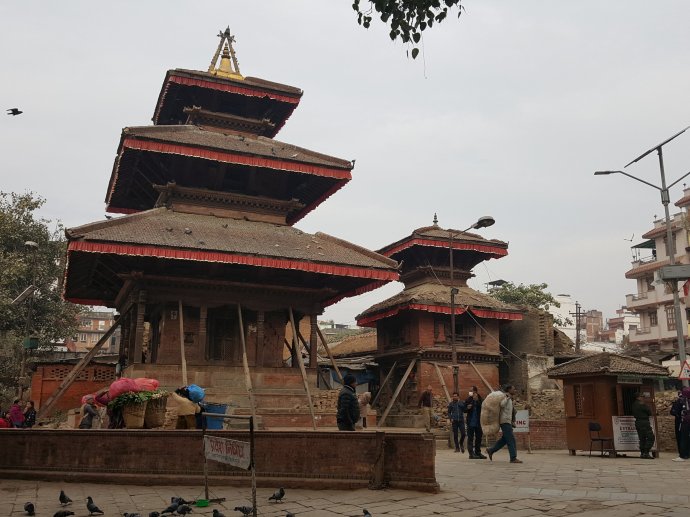 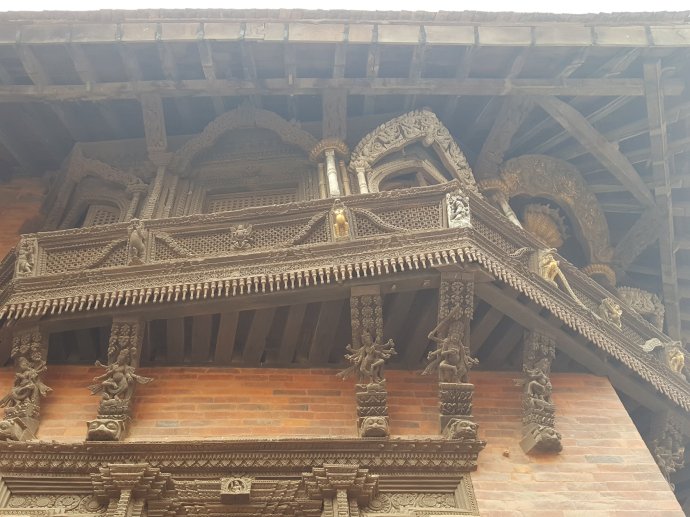 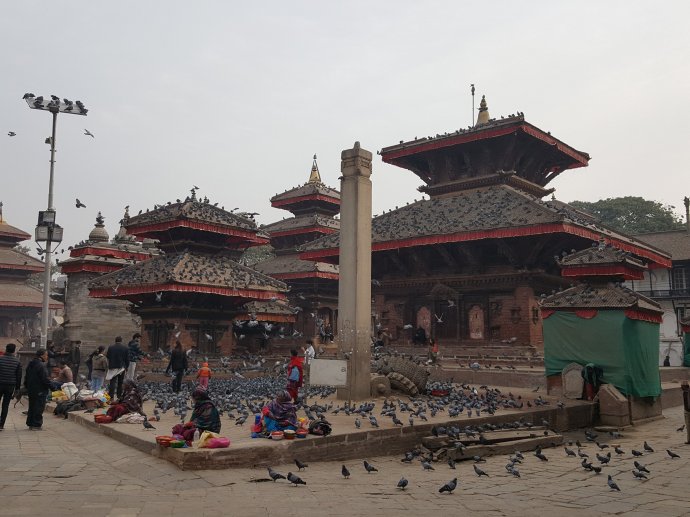 Headed south of the square for other interesting architecture. 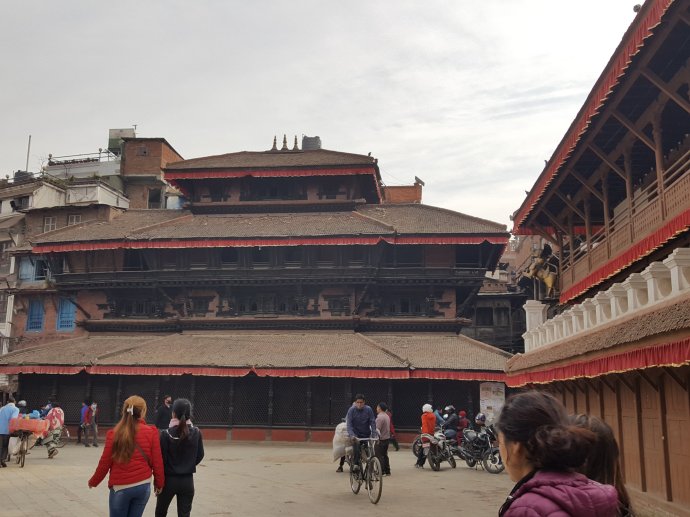 After the durbar square, I headed back to Thamel Marg for lunch at Kathmandu Kitchen.

Ordered some egg chowmien and vegetable momo.  I guess servings are really hefty in Kathmandu as the fried noodles came heaped on a plate. 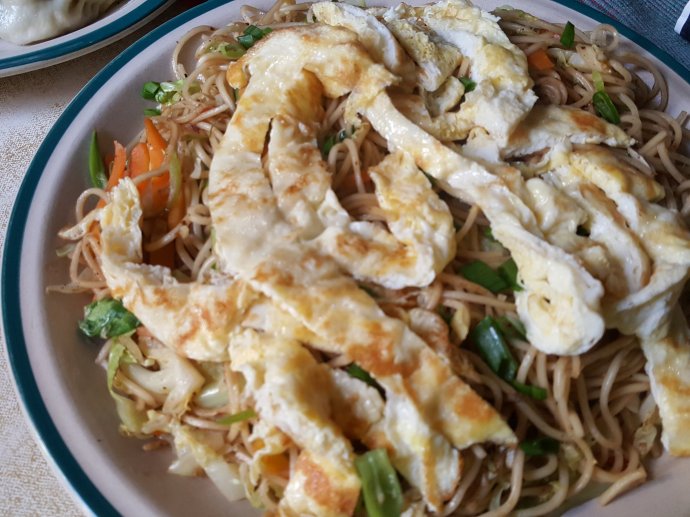 I could anticipate indigestion coming-up from too heavy a lunch of carbs.  It also meant not going to my planned sight-seeing of Swayahambounath temple and climbing all the way to the top as I might just puke out my lunch.  Just stayed put and enjoyed the fast free wifi at the resto.

Spent the rest of the  afternoon at this oasis of quietness in the middle of noisy Kathmandu.  On the way, stopped by a small tour office to book a private vehicle and driver for a day trip tomorrow to Kokana, Bungamati, Pasupatinath, and Boudhanna for Rp3600.  Yes, I’m such an anti-social.  No group tours for me.

The Garden of Dreams (open until 10pm, Rp200 entrance) has a French garden feel with a small square pond and some pavilions.  You can easily forget your in Kathmandu and just a few meters away from backpacker central that is Thamel Morg.  The garden is quite small but makes for a nice place to just park your bum on one of the many benches strewn about. There were not too many people when I got there around 3pm. 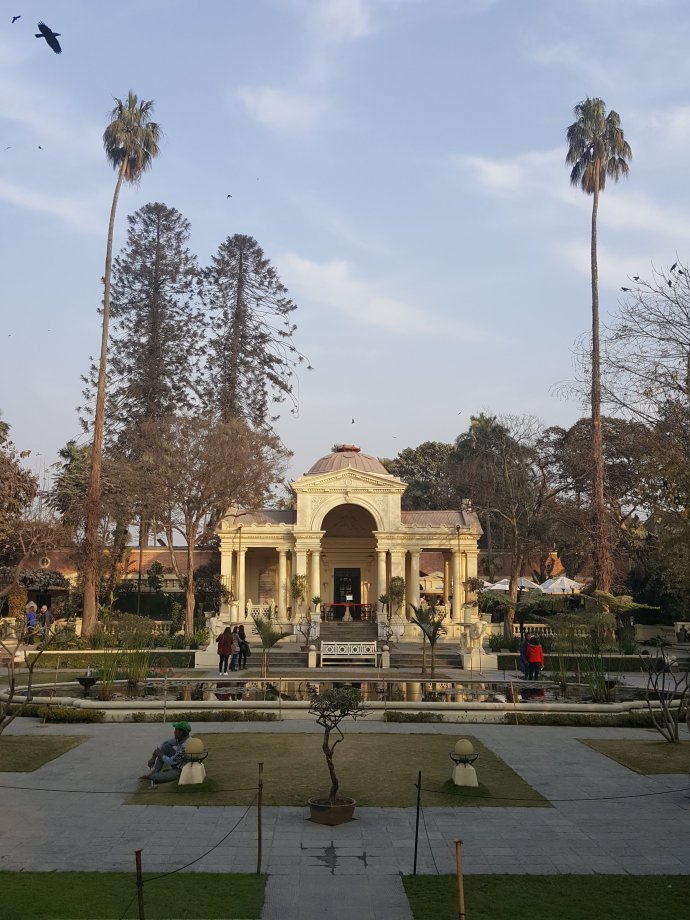