Bahn and Bike at Hue

It was a scooter really and not a motorbike.  But it still ran on two wheels and we were in Vietnam, not exactly the best place to start conquering your fear of riding a motorbike, okay, at least, a scooter.  But I guess, even dangerous things start having a life of their own once you start seeing more and more of it.  And in Vietnam, riding a bike seems de rigeur, especially for tourists.

I was ALMOST tempted to try one at Hoi An, touted to be one of the safest places (read: slow drivers) for bikes.  On the highway from Danang I did notice that everyone seemed to be going at a slower pace.  Well, after the craziness of all those maniacal motos at HCMC, everything just has to look slower.  But if even the moto drivers in Hoi An are less pushy, then there must be really something.

I literally threw all caution to the chilly wind as a climbed behind Quan when he picked me up along Ly Quan.  He promised me a good dinner of all those bahn specialties of Hue I have read all about.  I also made him promise me to drive slowly and to keep looking at the road as he had the tendency to look at me whenever he said something.  Thankfully, it was past 7 in the evening and the traffic was very light.  As we rode along the streets, my nervousness slowly dissipated.  There was nothing to be afraid of after all or maybe it was because he was only going on a speed of about 30.

From the main road, we turned right to a small lane and stopped in front of  a tiny house-eatery that was just about to close its doors.  The only indication that it served food were the words bahn painted red on the glass.  Quan said something in Vietnamese and the lady let us in.  They were closed already but he knew her and he asked her to open up as I was a foreigner, Quan explained.  I was a little embarrassed though quite surprised as it as only seven in the evening.  What would normally be the living room was the dining area.  We sat at the only wooden table.  Small tables were folded and stools stacked against the wall.

Who would have thought that such delicious morsels of food would come from the simple place.  We were first served small parcels of a pinkish chewy paste called nem .  It has a strange sour taste that grew on you.  Next came a large round tray that held small saucers of ban bo topped with shrimp and pork cracklings and served with a sllightly sweet nuoc mam with chili. It was absolutely delicious!  But the best was yet to come.  Steamed leaves held a pasty rice flour topped with what seemed and tasted like chopped fish and shrimp while another was an entire shrimp encased in a thick sweetih paste.  It was Vietnamese cuisine like no other!  Very tasty!  The entire meal plus a small bottle of water cost VD 100,000!  It was worth every risk and fear I had to swallow with the bike ride.

Stomach full and taste buds happy, I wasn’t as nervous anymore.  We rode around the outside of the Citadel and on the side streets in the center of town.  Even in the travellers area, there weren’t much people.  I enjoyed the ride very much as I got to see parts of the city outside the tourist map.  It was very cold though as it had been raining the entire day since I arrived from Hoi An around noon time.

Nowhere is it more gratifying seeing your name printed-out on a piece of paper than stepping off the bus from Hoi An to rain-soaked chilly morning at Hue.  I had not expected that my hotel, the Original Bihn Duong, located a little away from the traveller ghetto would send a free car to pick me up.  But there it was!  As everyone was trying to get their bearings in the cramped lobby of the hotel where the bus dumped us all, I looked up to see a man standing outside with a piece of paper.  Thank god for hotel pick-ups. 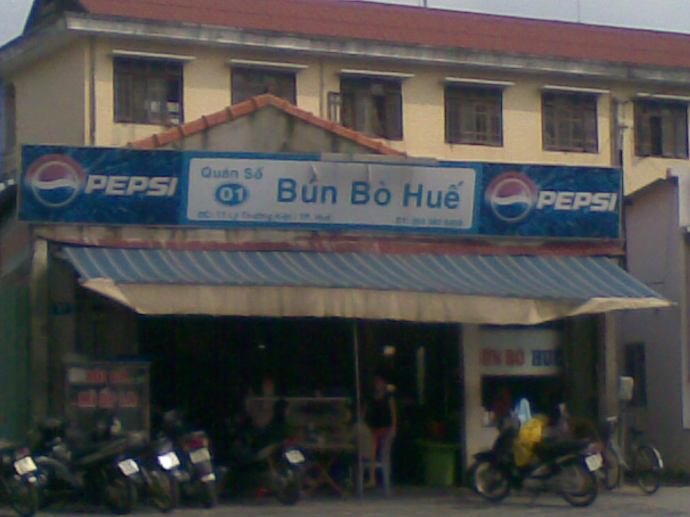 I had a really nice room at the hotel and the staff was ultra friendly and accommodating, pouring everyone a cup of hot green tea every time they sat down at the lobby.  Since my room was still occupied, they gave me a temporary room on the third floor which I could use.  It was a really big one with three beds.  Looking out the window, I saw a sign on top of a local eatery— “bun bo hue” it read.  It was listed at Wikipedia as the place for this specialty.  And it was just what the weather ordered.

I took one of the few empty spots and sat down. There was no need for any words in this local eatery.  You merely sit and wait.  A server soon set down  large steaming bowl of noodles in a hot herbal broth with chunks of pork.  The flavorsome broth slowly melted the cold away.  The soup was so good I was halfway through before I took a break from slurping.  Thumbing through my Lonely Planet Vietnam, the bespectacled guy  beside me who came in just about the same time as me, asked me where I am.  He looked  like he was in his early twenties and Vietnamese.  “Philippines.”  “I’m from New Jersey.”  That explains his English.  He’s from the US and is  currently on vacation with his family.  He reminded me of Israel, a college classmate.  He was always hungry he said and can finish two bowls of soup.  After this, he was going to buy some  bahn beo at a stall down the street. I walked several paces behind me to see where the stall was.  With my broken umbrella, I could say that I was looking to buy a new umbrella at one of the general merchandise stores lining the street should he spot me.

I did discard my umbrella for a new one which cost a whopping $ 4!  I never made it to the Citadel though I reached the foot of the bridge that spanned across the river.  With the driving rain, I had to turn back.  Kinda hard to be holding an umbrella while you’re looking at a map with the other hand.  What to do next?  Get some bahn beo to soothe the frustrated soul. I got one plus the some smaller fried ones.  I ate them back at the hotel and they were good.

Seems like the rain won’t let up the rest of the day.