Chaotic GenSan and the Search for the Maranao Market

After the lake and the forests, the culture and the people, it was disconcerting to be in GenSan.  It was like my trips to Sagada before when upon arriving in Baguio City, the first thing I wanted to do was leave right away. I might as well go back straight to Manila.  Nothing in the city that had been listed in internet sites interested me. Those that did such as Mt. Matutum and Kalajia Karsts needed more time.  With just the afternoon to spend as I was returning to Manila tomorrow morning , the only thing I planned to do was head to the Maranao shops across the public market which I had read so much about. I actually left Lake Sebu early so I would have enough time to browse the shops and hopefully find something.

The Case of the Missing Maranaos

The multi-cab dropped me at  Dolores Hotel which I had called a week before to reserve a single room.  It was located in a busy thoroughfare and was just a stone’s throw away from the public market.  There was a large lobby and a small business center.  Php 550/night got me a large room with a double bed, a small tv, and ensuite toilet and bath.  It was good value for its price and was clean at least.  It was mid-afternoon so I just showered a bit then headed out to the public market just around the corner to look for the Maranao souvenir shops.  Stuff here was reportedly being sold there at a much lower price than Davao.

I circled the entire block of the public market, did it again for another time, and then again, asked the security guard at the hotel, used Google Maps and the GPS in my Blackberry device, checked out the internet posts, but THERE WAS NO MARANAO SOUVENIR SHOPS!  Sure there were plenty  Maranaos and plenty Maranao shops selling sundry goods but where were the colorful malongs and the shiny brassware?  The latest internet post about the souvenir shops were just a little over a year old but the time period between then and now must have been enough for changes to have taken place.  Like an archaeologist out to find a hidden city buried underneath centuries of rubble, I went back to its reputed site and other possible sites.  There was no trace of the market.  The hotel guard had mentioned “TLJ” but it was just a small general merchandise store.  Defeated, I went back to my hotel.

The Case of the Missing Sauce

So what does the vanquished do?  Eat!  Blogs had mentioned Kanto Grill which supposedly serve the freshest seafood on top of which was their secret sauce which was to die-for.  The hotel staff didn’t know about it.  Bad sign.  They asked other guests. Negative.  Hmmmm. A lady who had just walked in and overheard the entire thing chimed in that Kanto Grill had already closed at its location had been taken-over by SM.  Another defeat.  I had come to look forward to GenSan for only two things—- the Maranao shops and Kanto Grill’s secret sauce and both had been reduced to nothingness. Frustration is a small word to describe how I felt at that moment.  Not willing to put my faith and trust in a dated blogpost, I turned to the friendly female receptionist and asked, “Where can I eat?”  She suggested I take a multi-cab and tell the driver to head to the barbecue places in San Pedro Lagao.

The driver didn’t seem to get it at first but I repeatedly kept-up the mantra, “Barbecue… barbecue…” either he was afraid I’d roast him over a charcoal pit or he had a sudden memory jolt but he did deliver me to a row of simple barbecue stalls with attached restaurants.  I went to the one at the far end on the right side which had two tables full of happy diners.

I chose two chorizoes and five sticks of pork barbecue.  Four days of eating nothing but tilapia had turned me into a ravenous carnivore.  Everyone else can have GenSan’s freshest seafood and tuna.  I want bits of sinewy muscle and soft fat. 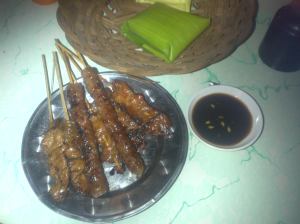 My order soon arrived together with a liter of Coke and two packets of rice in banana leaves.  What is it with Mindanao that it does barbecue so well?  The meat was tender and whatever marinade they used tasted very well.  It had just the right sweetness that went well with the smokey flavor imparted by the charcoal.  Extra two packets of rice please.

Done with dinner.  Now for dessert.  I took a trike to KCC Mall which I had passed by en route to the barbecue place.  It looked just like any mall with all the usual brands and a large food court and grocery in the basement.  Maybe because it was a holiday the next day that’s why the place was quite packed with people.  I didn’t find anything there to tickle my sweet tooth so I just headed back to my hotel.

Street peddlers had set-up shop selling second hand clothes at the street surrounding the hotel.  The public market was closed and in its place was an evening market along the road that sold cheap goods from China.  Nothing really special. 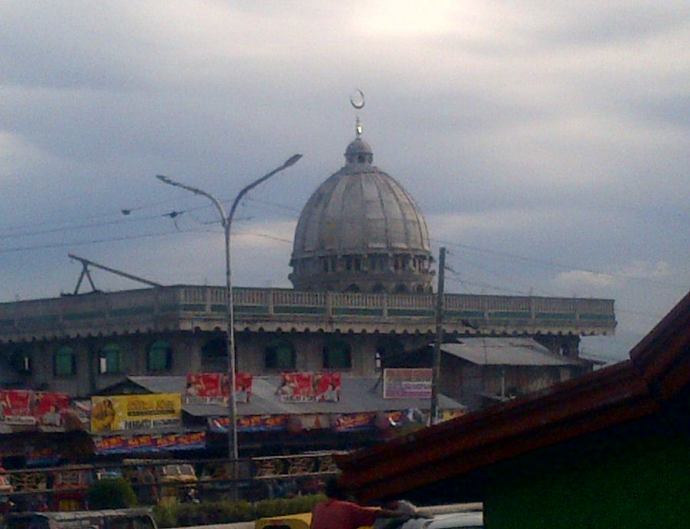 I only spent half a day in GenSan and didn’t go out much. From what I experienced in my very brief stay, I can’t say much about it.  There was nothing there to hold my interest plus I found the streets to be quite chaotic with all the multi-cabs.  Oh.  There was one thing I liked about GenSan, though.  In spite of  its population being largely Christian, Muslim presence was obvious here compared to other Mindanao cities such as Davao and Cagayan de Oro.  I chanced on a group of Muslim men in their white caps and gowns getting on a small jeep while the shiny minaret of a mosque loomed from behind.  The sight of that alone made me feel I was truly in Mindanao.  Mt. Matutum also makes an impressive sight as it looms over the city.

Lake Sebu Day 4: Back to GenSan

There was nothing more to do in the morning except to pack my stuff hoping everything would fit.  I have become an expert in packing musical instruments from all my trips abroad.  It’s easy if you’re packing stuff and heading straight to the airport.  Getting on land transportation is a little more tricky as it means less space and more carelessness in handling and stowing luggage.  Double all that when you need to get on a beat-up mini-van with about a dozen more people than it normally carries.

I had brought my Lowe Alpine 75+15 backpack which is quite huge but stashing my klutang there was out of the question.  In came the two sludoy wrapped in my used shirts.  I had already marked and removed the frets  so there would be less chances of the fragile strings snapping should it something heavy be placed on top of my pack.  The kumbing and sloli were wrapped in the tubao and placed between the sludoy.  I had brought my overnight bag as back-up bag in case the pack becomes too heavy and I go beyond the 15kg limit.  The klutang was wrapped in used straw sacks.  Mel had assured me when I called her that it wouldn’t be illegal to be transporting a small piece of wood.  I had become apprehensive that the DENR might call my attention to it as it seems just like any piece of cut wood. I would have to go through the entire process of explaining that it was in fact a musical instrument and why I have it. 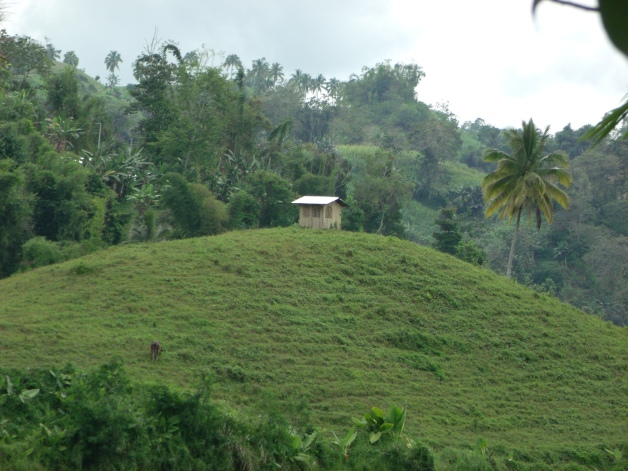 I had an early lunch of what else… sugba na tilapia and instant pancit. When I asked for my bill, Elmer said I need not pay as they owners who dropped by yesterday and who I chatted with had told them to feed me as I were their first guest.  The couple who owned the Green Box, a doctor-wife and an engineer-husband who are based in Insulan, Sultan Kudarat, were really nice and gracious.  If only for that, I’d give a 5-star rating to Green Box and would stay again and even recommend it to others.  Sometimes you can forgive not-so-good facilities for really wonderful hosts.

The van to Surallah passed by past 12 noon already and fortunately there was still an available seat and the luggage space behind the last row of seats wasn’t full.  I was really lucky to have taken that seat as I was to discover on later in the trip as passengers hopped on and off, they really did fill it beyond its capacity as even the space where the engine was is used for seats!  When the entire van was full, the conductor road outside hanging dangerously at the back.

Surallah was a mere thirty minutes away and we finally let out at the bus station.  A Marbel-bound bus was pulling out just as I arrived at the bus bay so I got on an empty bus that filled in about 15 minutes.  There was no air-con but the cloudy weather made everything.

As I sat by the window looking at the gorgeous countryside of rolling hills and flat plains, the conductor swang by to collect my fare.  I gave him a twenty-peso bill and four one-peso coins.  He looked at me puzzedly and said something in Ilonggo which I of course, could not understand.  “Tagalog,” I told him.  He was asking how much I had given him.  “Twenty-four,” I answered. He moved on.  He must have forgotten the twenty-peso bill I gave him.

The middle-aged man seated beside me struck up a conversation  (translated in English here).

“Is this your first time here?”

“Where are you from?

“Didn’t you get scared coming here?”

I was surprised with this.  But he must have been more surprised at me traveling alone in this part of Mindanao.  I didn’t feel nor see anything out of the ordinary as to invite fear during my entire course of travel here.  I felt I was just like in any other provincial town.  He  introduced himself as pastor who was heading to Marbel with his wife for some errands. They were both very nice and we talked until we reached the Yellow Bus Line terminal.

I loved how the bus connections were all so easy and quick.  There was a waiting a/c bus at the bay and I took an aisle seat beside a young guy in office uniform.  I had an hour to get a some shut-eye.

The multi-cab chocked streets of GenSan greeted us as we pulled into the bus terminal.  I already missed Lake Sebu.  I must have had a sign on my forehead reading: “I’m new here” as porters and trike drivers swarmed around me.  One particular brusque porter kept grabbing my bag and was about to carry it off to the trike I had negotiated Php 70 to bring me to the hotel in the city proper. I let out at loud yell and he took off.

I had truly come back to realty.