History, A Waitress with a Bad Wig Day, and Drunked Bastard Part 2

After the trouble with the tuk-tuk bastards yesterday, nothing could ever go wrong today not especially if breakfast was yummy machang from Cintra Food Court. I may not have found the small shop selling freshly-fried cheow tow and the “famous curry puffs” stall was still closed but the Hokkien dumpling and the Golden dumpling which were actually machang (a term the Chinese girl recognized) more than made up for it.

We walked to Penang Museum but not without dropping by the small adjacent shop selling curious where I bought a curious-looking 2-stringed lute with a scooped-up body and elephant carving at the back for RM60. The shop had a couple of other musical instruments but I could only afford to buy one.  The lute which the Chinese shopsman said came from Sarawak won out over the bowed Chinese lute.  When queried as to where he gets the stuff, he said that people come in and sell stuff from their houses which doesn’t seem to be far-fetched.

Three ladies and an old trolley

This was also my first time to set foot at the Penang Museum. It was small but the exhibit rooms were well-stocked and had very informative displays that were curated nicely.  Each of the ethnic groups living in Penang had their exhibit rooms and the Peranakans were of course the most lavish of them all.  The Indian room was also nice with its short glass walls with flickering lamps by the entrance.  The second floor exhibit was a little more serious as it was more on Penang’s history.  Pictures aren’t allowed in the museum but we managed to take some anyway as there was no one there and the staff were all at the lobby. 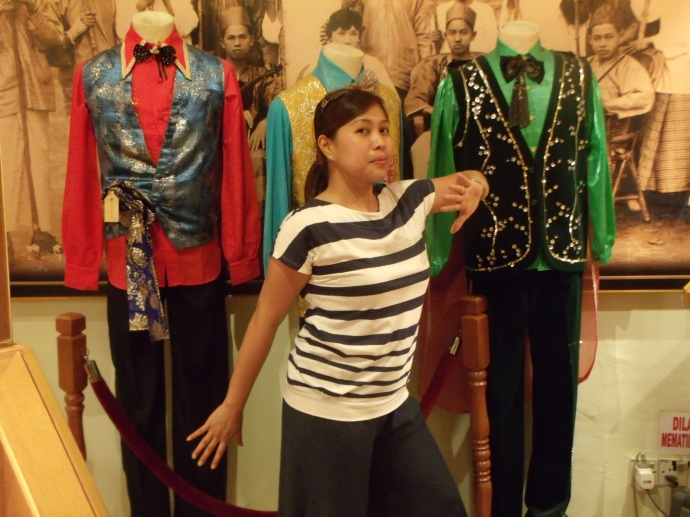 No, those aren't Kuya Germs' clothes on display. Those are costumes worn by "boria" musicians.

Walking along Jalan Masjid Kapitan Keling and on to Lebuh Light we headed to Fort Cornwallis passing by the glorious colonial buildings housing the Supreme Court, the Town Hall,  and the City Hall then along the Esplanade.

The Fort seemed to be in a little bad shape.  The galleries narrating the history of the founding of Penang seemed forlorn and there was no air-conditioning anymore.  Gone too was the re-creation of an army camp on the grounds near the cannons.  There wasn’t much too see nor do except take pictures of the cannons.

Since she also wanted to go back to Straits Heritage row I suggested that we eat somewhere there.  Lonely Planet came-up with Eidelweiss Restaurant which seemed to suit the girls.  The Indian cab driver was very friendly and pleasant.  Thank God!  After yesterday’s mishaps with the tuk-tuk bastards, it was refreshing to be driven around by a really nice person.  We arrived at Eidelweiss only to find out it was closed on Mondays.  Since we had alighted from the cab already there was no way for us to look for another place.  Since Straits Heritage row was just a short skip away, the girls headed to Bon Ton while I headed to the cafe for another slice of Ginger treacle cake.  Jeannette came back and said that someone from the shop mentioned a small cafe with lots of plants that serves Western food. It sounded like Amelie which we passed by yesterday.  It looked more like a sandwhich and drinks place.  While Julie and Yna stayed at the shop, Jeannete and I walked through the length of Jalan Kapitan Keling looking for a place to eat but all we found were gold shops.

Back at Strait Heritage, Yna was done with her shopping and we all assembled at the apom stall at the leafy park just across it.  While waiting for the middle-aged guy to prepare the pancakes filled with bannanas and peanuts who should we see sleeping on a park bench behind the stall?  Drunken Bastard!!!!!  He looked so peacefully asleep that I wanted to get one of the pans heating on the portable stove by the apom stall and whack him with it.  Or perhaps, get a load of the stack of bricks at the corner and dump it on his face!

After the apom had been paid for and received, the girls were reluctant to eat much to my amusement as the guy was holding it with his bare fingers.

Maybe it was coincidence day but as we waited for a cab to take us to Jalan Nagore so Jeannette could get her durian cheesecake at Continental and we could have lunch at one of the restaurants there, who should we flag but the same Indian cabbie! Learning that we hadn’t had lunch yet, he suggested the food court at World Park where we could have our choice of cuisine.  Good idea!

Yna still insisted on a credit-card accepting place so we ignored the fast food and headed to the much nicer area where the shops and restos were.  First stop was an Indian curry house.  Nah.  Across it was a Thai resto.  Not too excited.  Stomachs fluttered and hearts pounded when on a chalk board the words “Buffet” were written and up above, the resto sign board read ” Batik Nonya Cafe“! It was the best of both worlds— buffet and Nonya!  No questions asked. The language of appetite spoke to us and we responded.  The buffet only cost RM9! 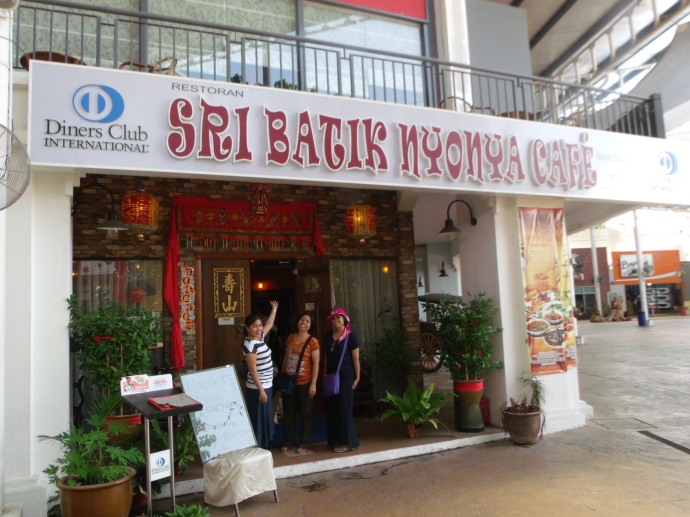 More of a proper restaurant than a cafe, it was spacious and was nicely furnished.  The buffet spread had clear soup, chicken like the one we had at Restoran Peranakan, otak-otak, fried rice, sigarilyas cooked in a medium-spicy shrimp,  paste, fried fish, baked beans  (which I suspect came from a can) with egg, and eggplant cooked in a spicy sauce.  For dessert there was red bean soup and a small ice-cream scooping station.  The food tasted good and judging from the size of the crowd lunching at a late hour (it was way past 1pm), it seemed to be popular.  Mixing vanilla ice-cream with the red bean soup was particularly good.  The star of the restaurant however was a waitress Yna dubbed as Tessa Prieto for her blond wig which really looked like a wig.  It was so stiff and it looked so flat on her forehead.  She was very nice though, constantly updating Jeannette about the fried fish which had run out on the buffet table.

The girls finally ate their apom but put a scoop of ice-cream.  I guess it kinda takes away the flavor of fingers when it resembles and tastes like a cheap French crepe.

As if we had not come from a buffet, we headed to Continental Bakeshop just across the street for durian cheescake.  “It’s lemon cheesecake today,” the cheerful waitress at the counter said.  Durian wasn’t in season anymore so they’re not sure when they’re gonna have one.  Yesterday was my durian cheesecake lucky day!

We all shared a cheesecake and a lemon custard tart instead.

Of kurtis and kurtas.

Walked to Jalan Penang to shed off some calories and do a little shopping which turned out not to be so little.  Yna bought a pewter salt-and-pepper shaker at Hong Giap Hang which had a wide range of pewter ware from the cheaper Rennaisance brand to the top-range Royal Selangor.  The large shop also had a lot of other stuff including some small Chinese drums and flutes from Sarawak.  I resisted the temptation promising myself that I’d get to Sarawak someday and buy there.  Next door was a less fancy shop selling mostly Chinese stuff where Yna and Julie bought those metal balls which you roll in your hand.  It was a steal at RM10 from RM15 per pair.  At the next shop, the girls bought some sarong pants.  Yna finally persuaded Julie to buy one.  It really did look good on her.  Julie was to surprise us at next door Sam’s Batik House where after a little persuasion she bought a couple of nicely-embroidered blouses. Actually, everyone went over the top at Sam’s like we were all turning Indian fashion conscious.

It started innocently enough with Julie and Jeannette persuading me to buy a striped beige long-sleeved cotton polo.  I was more interested in the hand-embroidered kurtas and even the long formal Indian men’s dress that were so richly embroidered but they were all running into RM100 and above.  I think they were intent on making me buy something to balance-out their shopping. The shirt only cost RM25 and the shop attendant was really pleasant and easy to bargain with so I bought it.  The girls finally left me alone to go at the back with Yna who was buying clothes for her kids.  When I joined them, the shopping spree had began.  The women’s clothes were really beautiful, especially the hand-embroidered ones, and the fabric cool to the skin.  I went back to the men’s section and discovered the buy-one-take-one rack of kurtas which were a steal at RM50 for two items.

By the time we were finished, the girls were loaded with blouses, I had three kurtas, and we even bought Rhoda some clothes.  I think we spent about two hours in the store.